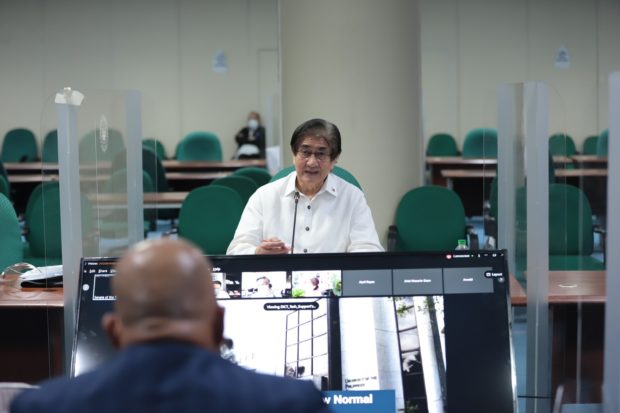 MANILA, Philippines — Senator Imee Marcos on Monday grilled the Department of Information and Communications (DICT) for letting private company Dito Telecommunity use some of its facilities for free.

This action of DICT, according to the lawmaker, has been earlier flagged by the Commission on Audit (COA).

“There’s also an issue in the COA report regarding DICT lending facilities for free to DITO Telecommunity…what facilities are these and do other telcos lease or borrow for free facilities? Why is this practice undertaken?” Marcos asked DICT officials during the hearing of the Senate finance panel’s subcommittee on the proposed 2022 budget of the agency.

DICT Secretary Gringo Honasan’s reply did not directly answer the query of Marcos, as he merely said that the agency is “at a loss when we are publicly, through media or otherwise, confronted with issues like these.”

But Marcos pointed out that she based her question on official COA documents.

She also told the DICT boss that she was raising such questions in order for the subcommittee to already settle the issue should the same matter be brought up during plenary debates on the 2022 national budget.

“Did you or did you not lend facilities to Dito?” she followed up.

DICT Undersecretary Emmanuel Rey Caintic explained that the leasing of facilities “predates” the creation of the agency.

“May mga properties po na even ‘yung the old telcos…sometimes they lease…para maglagay ng tore. This is no different when the third telco came. Nag-lease lang din po sila…marami pa pong mga existing leases from the other telcos,” Caintic said.

(There are properties that even old telcos…sometimes they lease to put up towers. This is no different from when the third telco came. They also leased…there are other existing leases from other telcos.)

However, Marcos pressed the DICT for an answer on why the agency’s lending of facilities to a private telco was only raised now by state auditors if it indeed had been a practice before.

(The question is, why is it only now that this appeared in the COA report when before—if this has been a custom, tradition, practice, and functionality on the part of the DICT—this did not appear, why is only now that this is raised?)

Honasan again did not directly answer the question of the senator.

The secretary instead went on to say that even the DICT is renting from the University of the Philippines since the agency’s properties are still under rehabilitation.

Honasan also said the DICT will submit to the Senate finance panel subcommittee a more detailed report regarding the query of Marcos.