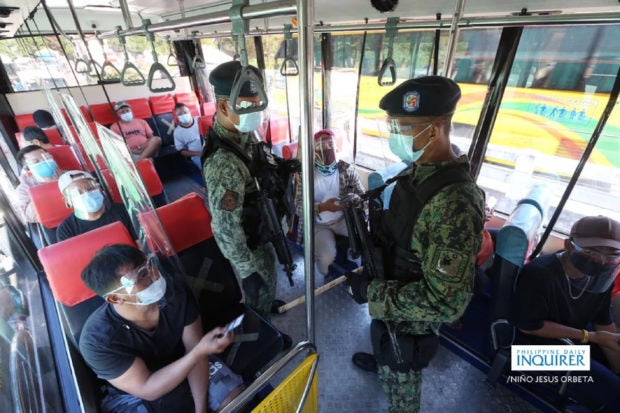 MANILA, Philippines — The Philippines is experiencing its fourth and “most severe” wave of COVID-19 infections without any sign of the virus spread slowing down, the president of the Philippine College of Physicians warned on Sunday.

The current positivity rate, or the number of infected among tested individuals, was just too high at nearly 30 percent, as opposed to only 5 percent to indicate a situation is under control.

“Definitely at this point, and this is my personal (opinion), this is already unacceptable,” said Dr. Maricar Limpin.

She said the current wave was likely fueled by the Delta variant as cases continued to surge even when vaccines have become available.

In a text message, she said Delta was the most virulent so far and highly transmissible, with some fully vaccinated healthcare workers still succumbing to the disease.

In a health workers’ forum on Sunday, Limpin agreed with the Department of Health’s (DOH) assessment that the current wave has yet to reach its peak, even after a single-day case count of more than 26,000.

Limpin referred to a Sept. 9 article published in the online media platform “The Conversation” that identified the Philippines’ first wave in April 2020, which was “modest” with a peak of 316 seven-day rolling case average.

In August 2020, the Philippines experienced its second wave, peaking at 4,300 daily cases. It was also when doctors called for a “timeout.”

“We equated that ‘timeout’ to the last two minutes in a basketball game when you huddle and talk about (strategies) to win. At that time, we didn’t know much yet (in terms of treatment and quarantine). We did what the US and Europe were doing,” she said.

Limpin said the third wave occurred in April 2021 and it reached a peak of 11,000 average daily cases.

The previous waves, however, were nothing compared with the present surge.

Limpin said that this time, the number of cases and deaths were much higher.

One contributing factor to the increase in fatality, she noted, was that patients were dying while looking for hospitals to help them.

The government reported a 77-percent utilization rate of intensive care units (ICUs), but Limpin said the situation was different in the hospital emergency rooms.

“I don’t know how they compute that. When we (doctors) talk among ourselves, everyone is saying ICU and (COVID) wards are full,” she said.

In a separate Facebook post, health advocate Dr. Tony Leachon said the government metrics were “wrong, misleading and dangerous for our policymakers (as they) give us a diluted picture of our health-care system.”

He said the DOH must conduct a daily census of the emergency rooms to see the new cases, hospital admissions, hospital transfers and even the rate of patients declared dead on arrival.

Given the current surge in cases and a waning efficacy against the Delta variant, healthcare workers said that — if they were to decide — they should already be given a third dose of the COVID-19 vaccine.

They were not only willing to take boosters, but it was a part of their demands, along with better salaries and protection, from the government, said Jao Clumia, president of St. Luke’s Medical Center Employees Association in Quezon City.

“Our stand on this is that, based on emerging science, vulnerable sectors, especially health workers, should be given the most efficacious vaccine booster. But considering the (national) vaccination rate, it pains us to be demanding for boosters when a bigger segment of the population has not had a single (dose) yet,” said Sean Velchez, president of the National Orthopedic Hospital Workers Union.

National Task Force Against COVID-19 chief Secretary Carlito Galvez Jr. said the government was working out a deal to buy a total of 90 million reformulated doses from Pfizer, Moderna, AstraZeneca, and Sinovac.

The booster rollout, however, may not happen until early next year.

The government’s Vaccine Experts Panel early this month recommended boosters for the highly exposed hospital workers as well as the immunocompromised individuals.

However, Health Undersecretary Maria Rosario Vergeire had said this was still being discussed, with many considerations such as the cost-effectiveness of a booster brand.

In the past week, an average of 20,000 daily cases have been reported.

The death toll rose to 36,788 after the DOH reported 205 more fatalities, including 94 people who were originally reported as recovered.

The DOH reported a positivity rate of 25.1 percent out of 70,571 people who were tested last Sept. 17. Two laboratories did not submit the results.