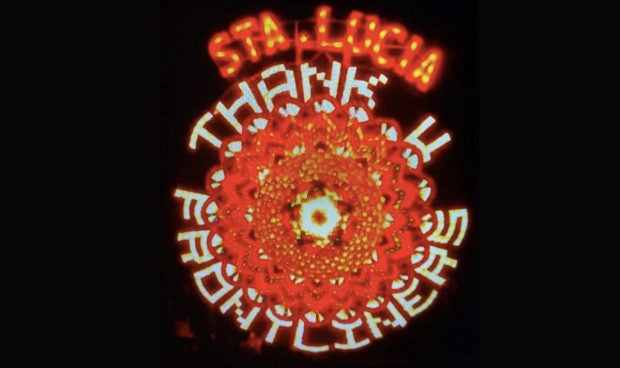 TRIBUTE: This lantern thanks frontliners in 2020. Seven giant lanterns will return in December for the 2021 Ligligan Parul in the City of San Fernando, Pampanga. (Photo by TONETTE OREJAS / Inquirer Central Luzon)

CITY OF SAN FERNANDO, Pampanga, Philippines — Handcrafted giant lanterns made in this Pampanga capital do not usually go by any other name. These are simply called “parul” (lanterns).

But in the second year of the pandemic, Arnel Flores, a prizewinning artisan of this unique Pampanga craft, was entertaining the idea of calling a batch of seven big creations as “COVID-19 lanterns.”

Flores said doing so would recognize the persistence of seven villages in continuing the tradition of making giant lanterns that was started by craftsman Francisco Estanislao in 1908, or almost 113 years ago.

A devout Catholic from Barangay Sta. Lucia here, Flores has enlarged his lantern to 8 feet and covered it with coco cloth, accompanying the image of the saint in Christmas dawn Masses.

In the last four decades, craftsmen have been using homegrown contraptions called rotors that make the lights dance based on the lanterns’ designs.

These were the same villages that exhibited their giant lanterns on the first year of the pandemic when organizers canceled the competition and held instead that year’s Ligligan Parul online.

Flores said joining the festival during the pandemic entailed sacrifices on the part of villages and lantern makers.

The lantern makers would have to work with smaller budgets and fewer workers since both the village councils and the city government were using most of their funds for pandemic response.

The subsidy from the city government and the private sector this time will only be about P120,000, or less than a fourth of mounting a two-story-tall lantern fitted with 15,000 lightbulbs and kilometers of wires.

In his case, Flores said he had limited the workforce from 20 to 10 and used some of the money to buy rice for the displaced workers.

“Deng parul mamye la ditak a tula. Pasalamat ka rin kung Apung Guinu uling akabyusan mu ing milabas a banua (The lanterns give joy. The birth of Christ should be a joyous occasion. It is also your way of thanking God for helping you overcome the hardship of the previous year),” Flores added.

For him, another reason for calling them “COVID-19 lanterns” would be to chronicle the pandemic that claimed millions of lives and ruined economies.

In 2020, the lantern makers designed their works as tribute to front-liners.

A rare time of name change happened also in December 1991 when the seven giant lanterns that “performed” at the erstwhile Paskuhan Village here were called “Pinatubo lanterns” to mark the eruption of Mt. Pinatubo on June 15 that year.

Ernesto Quiwa, a great-grandson of the pioneer, made a 15-meter wide lantern with two doors at the center. When these opened, an erupting volcano was revealed.

Quiwa, 74, has been championing the holding of the December festival come hell or high water.

“Malungkot ta na. Pailungkot ta pa (We are sad. Must we be sadder)?” Quiwa said. INQ