Iceland’s volcanic eruption the longest in half a century 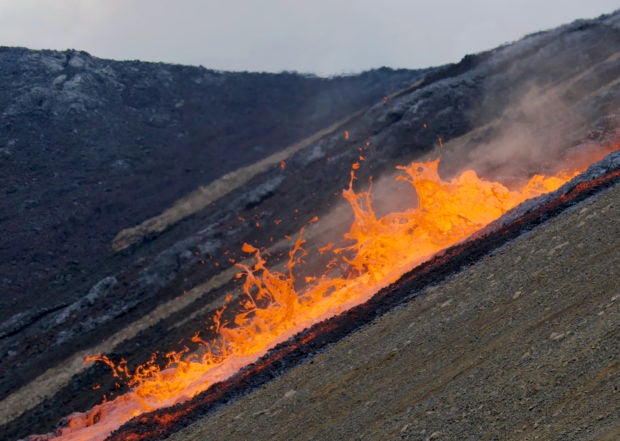 Lava flows from a volcano into the valley of Natthagi near Mount Fagradalsfjall, southwest of Iceland’s capital Reykjavik on August 26, 2021. AFP

ICELAND — It will be six months on Sunday that the volcanic eruption currently mesmerizing spectators near Reykjavik first began, making it the longest Iceland has witnessed in more than 50 years.

The first lava began spewing out of a fissure close to Mount Fagradalsfjall on the evening of March 19 on the Reykjanes peninsula to the southwest of Reykjavik.

And the ensuing spectacle — ranging from just a slow trickle of lava at times to more dramatic geyser-like spurts of rocks and stones at others — has become a major tourist attraction, drawing 300,000 visitors so far, according to the Iceland Tourist Board.

Iceland’s sixth volcanic eruption in 20 years is already longer than the preceding one in Holuhraun, in the centre-east of the island, which lasted from the end of August 2014 until the end of February 2015.

The lava field that has formed this time has been christened “Fagradalshraun” — which can be translated as “beautiful valley of lava” — and takes its name from nearby Mount Fagradalsfjall.

Almost 143 million cubic meters of lava have been spewed out so far.

But that is actually comparatively small, representing just under a tenth of the volume of the Holuhraun eruption, which spewed out the biggest basalt lava flow in Iceland in 230 years.

The latest eruption is “special in the sense that it has kept a relatively steady outflow, so it’s been going quite strong,” said Halldor Geirsson, a geophysicist at the Institute of Earth Science.

“The usual behavior that we know from volcanoes in Iceland is that they start really active and pour out lava, and then the outflow sort of decreases over time until it stops,” he said.

Iceland’s longest-ever eruption took place more than 50 years ago — on Surtsey island just off the southern coast — and lasted nearly four years, from November 1963 until June 1967.

No end in sight

After subsiding for nine days, the lava reappeared at Fagradalshraun in early September, occasionally spurting red-hot from the crater and accompanied by a powerful plume of smoke.

It also accumulated in fiery tunnels beneath the solidified surface, forming pockets that eventually gave way and unfurled like a wave onto the shore.

The real number of visitors trekking to the rough hills to view the spectacle is probably even higher than the estimated 300,000, as the first counter installed on the paths leading to the site was only set up five days after the eruption.

In the first month, 10 fissures opened up, forming seven small craters, of which only two are still visible.

Only one crater is still active, measuring 334 meters (1,100 feet), according to the Institute of Earth Science, just a few dozen meters short of the highest peak in the surrounding area.

Nevertheless, the volcano is showing no sign of fading anytime soon.

“There seems to be still enough magma from whatever reservoir the eruption is tapping. So it could go on for a long time,” said Geirsson.