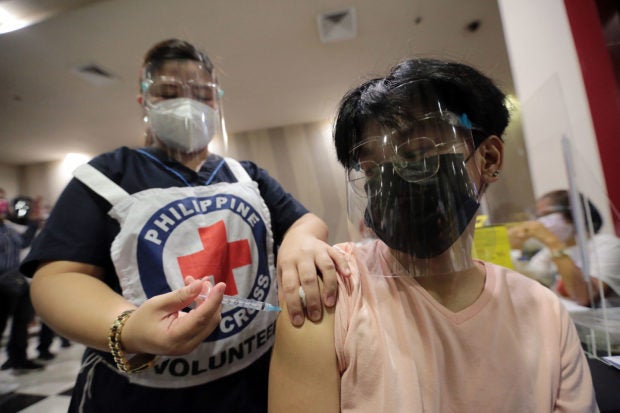 “We have fully inoculated more than 23 percent of our 77 million target population and this serves as a source of inspiration to the task force, as well as the [local governments], and the private sector [that] have fully supported our vaccine program,” Galvez said.

“This is a testament that our vaccination program is on track and is continuously scaling up despite the multiple challenges we have faced in the past weeks,” he added.

This was far from the target of fully vaccinating 70 percent of the population to achieve herd immunity by the end of the year.

As of Sept. 16, only 4.2 million, or roughly 51 percent of senior citizens, have been fully vaccinated, a rate that the World Health Organization lamented as “painfully slow … unfortunate and unsatisfactory.”

But Galvez said the NTF was working to address the slow pace of the vaccination of senior citizens and that the number of fully inoculated individuals should increase to at least 20 million by the end of the month.

The NTF, he said, expects a higher turnout in vaccination sites in the coming days as different regions—aside from Metro Manila and eight other regions of concern—have opened their vaccine rollout to A4 (essential workers) and A5 (indigent people) priority groups.

He also said the NTF expected a general slowdown in vaccinations because local governments were facing a myriad of issues, including lack of manpower, an increasing number of COVID-19 cases, distribution of amelioration packages, and addressing the impact of recent typhoons.

At the same time, Galvez said on Friday that the “vaccination tempo for the National Capital Region (NCR) was nearing its saturation point” and the government might finally start inoculating teenagers.

“We are looking at expanding the vaccine rollout to the younger population or those 12 to 17 years old in NCR. We are awaiting the recommendation of our vaccine and public health experts regarding this matter, but the NTF, along with Metro Manila mayors, have started preparations for this expansion,” he added.

Galvez earlier proposed to open the vaccination to the general population, including vulnerable children with comorbidities, by October.

The country has received a total of more than 59 million doses of COVID-19 vaccines, both procured and donated.

The latest—961,000 doses of Moderna procured by both the national government and the private sector—arrived on Saturday.

Also expected to arrive on Sept. 19 are 3 million government-procured doses of Sinovac and more than 2 million doses of Pfizer from the COVAX facility.