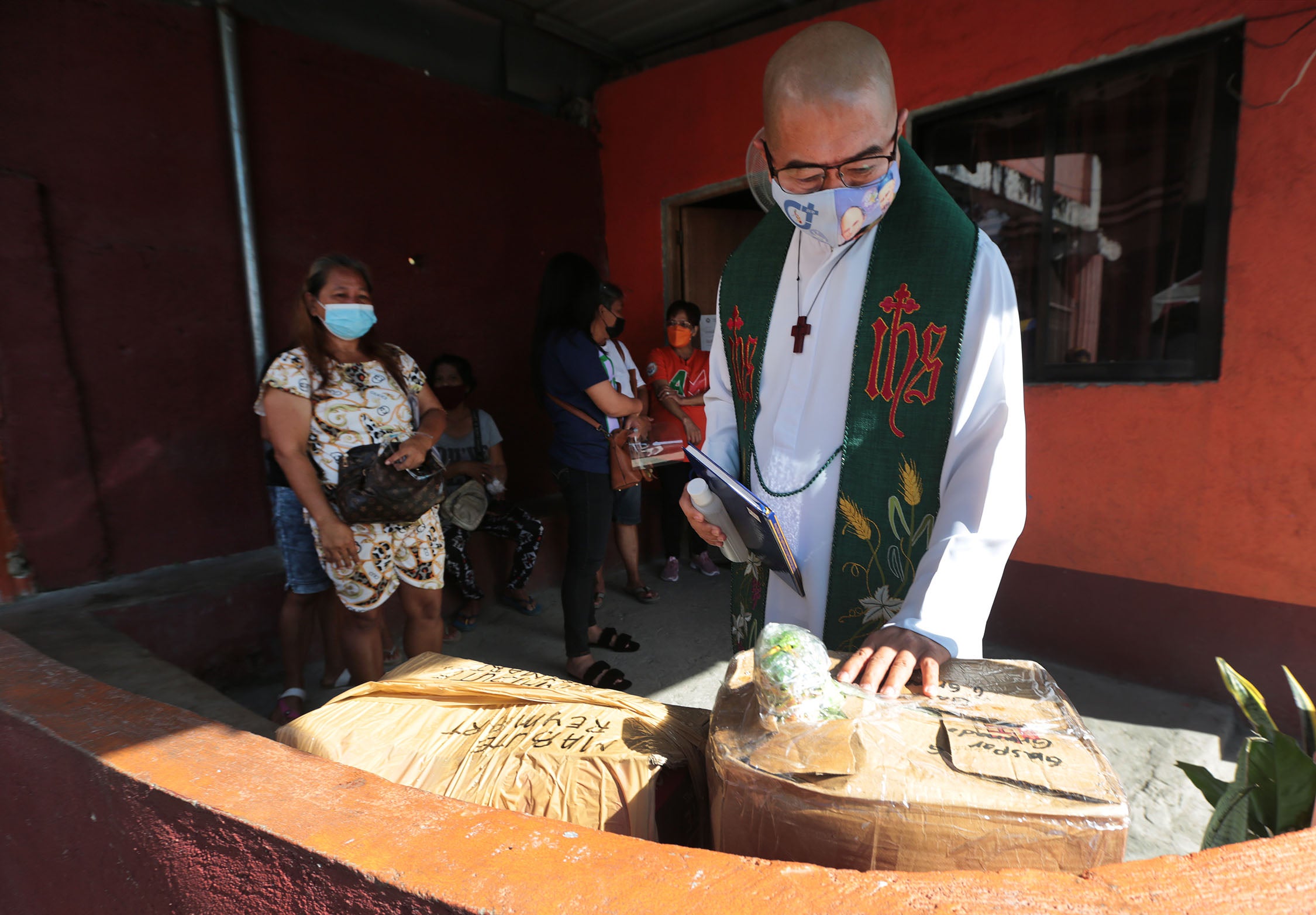 EARLY CASUALTIES Fr. Flavie Villanueva prays over boxes containing bones exhumed from Tala Cemetery in Caloocan City on Friday. The remains are that of two men shot dead by the police in an antinarcotics operation in 2016, during the first months of President Duterte’s war on drugs. —GRIG C. MONTEGRANDE

These and others are among the ICC Pre-Trial Chamber I’s findings, as contained in its 41-page ruling authorizing an inquiry into alleged crimes against humanity committed from Nov. 1, 2011, to March 16, 2019.

“In the assessment of the chamber, there exists information sufficiently linking the killings in the Davao area in 2011 to 2016 to the relevant facts of the so-called war on drugs campaign,” the pretrial chamber said.

It noted “similarities between the killings in the Davao area” and the war on drugs that “merit further investigation.”

It also said it detected “a certain pattern” in the Davao killings that “may constitute crimes against humanity within the jurisdiction of the court.”

The chamber’s ruling also contains ”big hints” on who could eventually be held liable for the killings, lawyers familiar with the ICC process said on Thursday.

They see the President, in his capacity as then vice mayor and chief architect of the campaign that originated in Davao City, as among the possible people to be issued arrest warrants or summonses in connection with the case.

“That they were identified means the Office of the Prosecutor (OTP) has eyed them as among the most guilty of the crimes alleged to have been committed,” international law expert and professorial lecturer Romel Bagares told the Inquirer.

“I’d expect maybe a couple more names. Remember that the ICC only targets the ring leaders for prosecution, and not foot soldiers,” Bagares said.

Among the similarities noted between the pre-2016 Davao City killings and the nationwide war on drugs was “the systematic involvement of security forces in the killings, including of the so-called Davao death squad.”

Per available information, the pretrial chamber said, “some of the persons involved appear to be the same,” including certain police officers transferred from Davao to Manila when Duterte became President.

“Similarities in the modus operandi are also discernible,” the chamber noted.

Citing information submitted by former ICC Chief Prosecutor Fatou Bensouda, the pretrial chamber said there were 385 victims of extrajudicial killings in Davao City in 2011 to 2015.

Part of the decision reads: “The chamber accepts that the supporting material sufficiently indicates, at the present stage, that groups of local police officers and vigilantes perpetrated numerous killings of predominantly young men suspected of involvement in small-scale drug dealing or minor crimes, such as petty theft and drug use. The chamber notes in particular the information to the effect that a so-called Davao death squad operated, and that local law enforcement units were heavily involved in its operation.”

Also cited were Duterte’s public remarks “supporting and encouraging” the killing of petty criminals and drug dealers in Davao City and elsewhere.

“These public statements … appear to form a coherent progression,” the pretrial chamber said. Among Duterte’s “kill” statements that it cited were: in 2009, that those involved in illegal activities in Davao City are a “legitimate target of assassination”; in 2015, that he killed “around 1,700” people; in February 2016, that his term will be “bloody” because he will order the killing of criminals; in May 2016, that he will kill 100,000 criminals in his first six months as President; and in September 2016, that he is like Adolf Hitler in slaughtering drug addicts in the country. The chamber said that although the war on drugs was modified several times, “this did not affect the essential tenets of the campaign.”

“In this context, it is significant that a marked increase in killings of persons allegedly involved with drugs was reported” when Duterte became President, it said.

With the pretrial chamber greenlighting a probe, the ball is now in OTP Chief Karim Khan’s court to provide evidence that would back the issuance of arrest warrants or summonses on the suspects.

But the preliminary investigation (PI) stage will also require “jurisdiction over the person of the suspects,” Bagares said. “This is where delays are almost sure to be encountered in the conduct of the PI, because Duterte and his administration have stated they will not cooperate with the investigation.”

Preliminary investigations by the ICC run “for as brief as one month to as long as many years,” Bagares said. Often, the delay is caused by suspects remaining at large, as was the case with ousted Sudan President Omar al-Bashir, who faces charges of crimes against humanity and war crimes.

In short, “everything else will depend on the enforcement of the arrest warrant or the cooperation of the suspects,” Bagares said. Malacañang’s promise that it would not cooperate with any ICC probe also means inevitable delays in this stage, said Kristina Conti, who serves as legal counsel for the families of the drug war victims that filed the complaints at the ICC.

But Duterte’s “braggadocio can be his own undoing,” Bagares said. Even without the Palace’s cooperation, his many pronouncements “provide lots of digital/electronic evidence to help establish state policy [of killings],” Bagares said. “[This} might be the first time in the ICC’s 23-year history that digital evidence will play a key role, especially with the lack of cooperation,” he said.

More importantly, the ICC “is not without power, resources, experience, precedents and ideas to address these impediments,” said National Union of Peoples’ Lawyers president Edre Olalia.

Among others, he noted that the OTP had preserved evidence beforehand, and that it could also “resort to open sources, discreetly conduct local investigations, maximize secure digital means of communication, or conduct them in a safe foreign venue when necessary.”