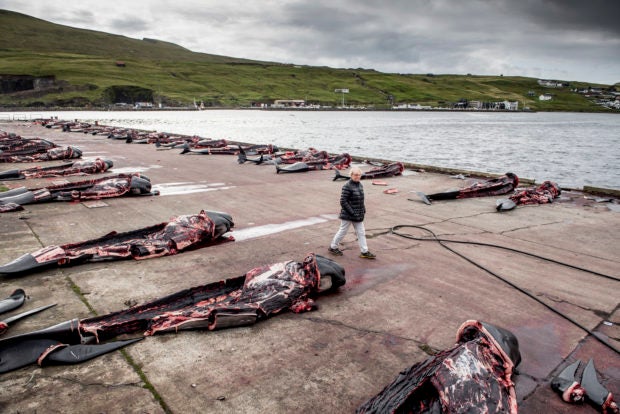 File photo taken in 2018 shows a man walking among pilot whales on the quay in Jatnavegur near Vagar on the Faroe Islands. In the Faroe Islands it is legal and a tradition to catch pilot whales. If a bunch of whales are observed close to the coast, it is driven into one of the 23 approved whale bays. Here the whole flock is killed with knives. When the whales are lifted up on the quay, they are slaughtered. The catch is divided according to an intricate, traditional distribution system between the participants in the hunt and the local residents of the whale bay and people from the local area.  (AFP)

COPENHAGEN, Denmark – The Faroe Islands, an autonomous territory of Denmark, said Thursday it would take another look at the practice of dolphin-hunting after the slaughter of more than 1,400 of the mammals earlier this week sparked an outcry.

“The government has decided to start an evaluation of the regulations on the catching of Atlantic white-sided dolphins,” the northern archipelago’s prime minister, Bardur a Steig Nielsen, said in a statement.

“Although these hunts are considered sustainable, we will be looking closely at the dolphin hunts, and what part they should play in Faroese society.”

The comments come in the wake of an outcry over the culling of more than 1,400 dolphins on Sunday, in what was said to be the single biggest hunt in the North Atlantic islands.

Traditionally, the Faroe Islands  — which have a population of around 50,000 — hunt pilot whales in a practice known as “grindadrap”, whereby hunters first surround the whales with a wide semi-circle of fishing boats and then drive them into a bay to be beached and slaughtered.

Normally, around 600 pilot whales are hunted every year in this way.

But photos showing more than 1,420 Atlantic white-sided dolphins in a fjord near Skala in the centre of the islands on Sunday sparked outrage on social media.

“It has long been recognised internationally that pilot whale-hunting in the Faroe Islands is sustainable and that the number of pilot whales in the northeast Atlantic is abundant,” the government statement said.

However, the situation on September 12 was “exceptional” in terms of the actual numbers, which meant that the culling took an unusually long time, the government said.

Sea Shepherd, a charity that campaigns against the hunting of whales and dolphins, has described the “grind” as barbaric.

“If we have learned anything from this pandemic is that we have to live in harmony with nature instead of wiping it out,” the NGO’s chief, Alex Cornelissen, said in statement on Thursday.