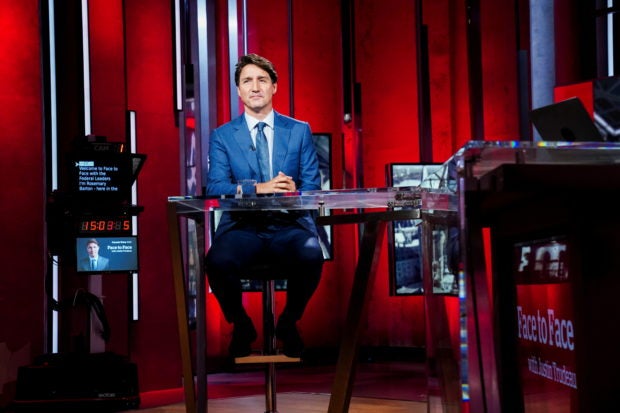 MONTREAL  –  Canadian Prime Minister Justin Trudeau, seeking to carve out a lead ahead of Monday’s election, on Thursday said his main rival had adopted a lax approach to fighting COVID-19 and shown weak leadership.

Opinion polls show Trudeau’s Liberals are tied with the right-of-center Conservatives of Erin O’Toole and look set to fall well short in their bid to win a parliamentary majority.

“The choices that leaders make in a crisis matter … just a few days ago Mr. O’Toole was still applauding Mr. Kenney for his management of the pandemic,” Trudeau told reporters in Montreal.

“That’s not the leadership we need in Ottawa to end this pandemic for good,” added Trudeau, who backs mandatory vaccine mandates. The Liberal leader has been in power since 2015 but only has a minority of seats in the House of Commons.

Trudeau said Ottawa would be sending ventilators to Alberta, which shut out the Liberals in 2019’s election. Liberal campaign organizers, citing unhappiness with Kenney, say the party could pick up three of the province’s 34 seats.

How to handle COVID-19 has become a political challenge for O’Toole. He favors inoculations but says he prefers rapid testing rather than vaccination mandates.

The Conservatives could also see support leak to the right-wing People’s Party of Canada (PPC), which is feeding into public anger over vaccinations and lockdowns.

In a tweet, PPC leader Maxime Bernier attacked Kenney over his vaccine passport announcement. Bernier said he would go to the province “to join Albertans in their fight against this despot.”

A rolling Nanos Research telephone survey of 1,200 Canadians for CTV on Thursday put public support for the Liberals at 31.9%, the Conservatives at 30.3% and the left-leaning New Democrats at 22.4%.

Such a result could produce deadlock in which no party is able to form even a stable minority government. Trudeau triggered the election two years ahead of time, seeking to benefit from his handling of the pandemic, but the Liberals could not shrug off voter fatigue.