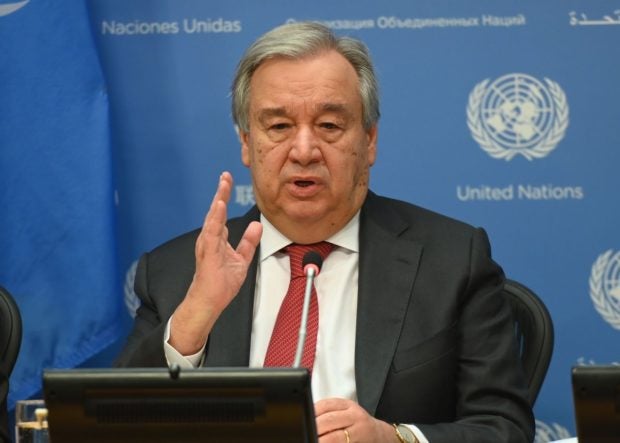 The roundtable comes less than six weeks before a major United Nations climate meeting, COP26, in Glasgow, aimed at ensuring the world meets its goal of holding century-end warming to 1.5 degrees Celsius.

“UNGA is the last big moment in the international calendar ahead of COP26,” Britain’s UN ambassador Barbara Woodward said in a statement. “Climate change will be the UK’s top priority.”

A senior UN official said Wednesday that over the past two years, leaders had conducted climate discussions at the G7 and G20, but there had not been a forum for leading economies to speak with the hardest-hit countries.

Asked why the meeting was closed-door, he said: “It’s not intended in any fashion to be a meeting in the shadows,” but a way to facilitate frank dialogue “rather than pre-prepared statements or reverting to established positions.”

The meeting will include leaders from the G20, as well as developing and small island nations, and will be partly in-person, partly virtual.

It’s not yet known who or how many will attend, including, crucially, whether the leaders of the world’s top two polluters — Chinese President Xi Jinping and his US counterpart Joe Biden — will take part.

Guterres has laid out three climate priorities. First, the UN is asking countries to strengthen their commitments to reach net-zero emissions by 2050 under the 2015 Paris agreement.

Second, it wants developed countries to fulfill a promise to raise a $100-billion climate action fund.

Third, it wants a “significant breakthrough” on financing for adaptation projects for hard-hit nations, to protect them against events such as droughts, floods, and sea-level rise. The UN wants adaptation finance to account for 50 percent of all climate finance.

With only 1.1 degrees Celsius of warming so far, an unbroken cascade of deadly weather disasters bulked up by climate change swept the world this summer, from asphalt-melting heatwaves in Canada to rainstorms turning China’s city streets into rivers.

Read Next
$12 million seized from ex-officials as cash crunch hits Afghanistan
EDITORS' PICK
DOTr to defend proposal to increase passenger capacity in public transport
USAID Opportunity 2.0 calls for applicants for grants for out-of-school youth engagement
Only 4,393 new COVID cases logged due to low number of tests
Hong Kong to further tighten COVID-19 travel restrictions
Legarda emphasizes role of ICC/IPs in nation building this IP month
Work-From-Home is here to stay and requires reliable logistics
MOST READ
Bongbong says PH should modernize infrastructure to become Asia’s next logistics hub
Isko to critics after remarks vs Robredo: I’m sorry, this isn’t about Mr. Congeniality
Pacquiao plays 9-ball with billiards legends Bata Reyes and Django Bustamante
Martires asks why he is being singled out over issues on releasing SALNs
Don't miss out on the latest news and information.