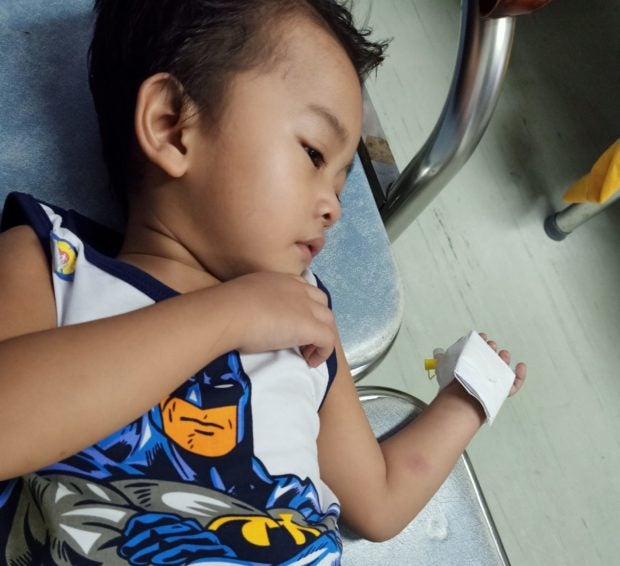 MANILA, Philippines — Ramon Torres said he was in disbelief when the doctor told him in July that his 3-year-old son, Radan Lucas, had suffered a relapse and would need to shift to high-dose chemotherapy to counter the cancer cells that had been detected again in his blood.

“My wife and I were dismayed. We did everything we could for him. We were very careful when it came to his care. My son was lively and had a good appetite. He didn’t look sick,” Torres told the Inquirer.

Radan Lucas was diagnosed with acute lymphocytic leukemia in September 2019, after he developed a persistent fever and his complexion turned pale.

A pediatrician at Bernardino Hospital attributed his condition to urinary tract infection and sent him home.

“We went back because my son turned paler and a bump grew on his neck. A [complete blood count] showed that his platelet and hemoglobin levels were low and the doctor told me to take him to a bigger hospital. I borrowed the ambulance from our barangay to bring him to Philippine Children’s Medical Center,” Torres said.

Father and son spent two weeks at the emergency room of the hospital which was then overflowing with dengue patients.

Radan Lucas was immediately given blood transfusions while undergoing more tests to determine his condition.

“When the doctor said my son had leukemia, it felt like heaven and earth had fallen on us. We couldn’t accept it because both of our older children were healthy. We thought it was just dengue because they were giving him blood transfusions,” Torres said.

The boy immediately started the first of 12 chemotherapy cycles recommended by the doctor in October 2019.

The news that his son had suffered a relapse after almost two years of treatment was hard for Torres to take, especially since he saw the change in his son.

“He’s not the same boy. He didn’t look sick before. Now, he tires easily. He just wants to lie down and sleep. He’s pale and he’s lost a lot of his hair,” he said.

But Torres remains hopeful, saying they would continue to fight beside their son while praying for a miracle.

Right now, the family relies only on the income from Torres’ side jobs after he was laid off as a factory worker due to the pandemic.