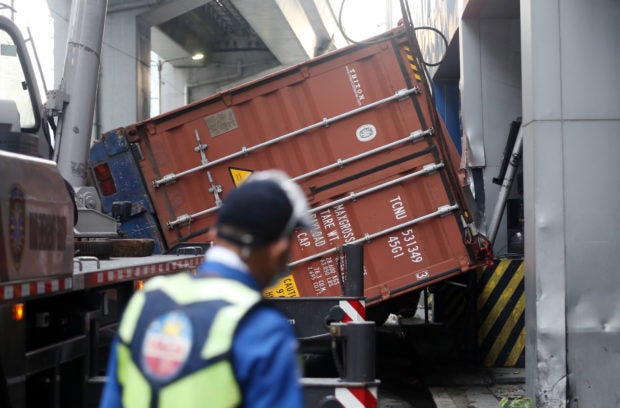 TRUCK ACCIDENT A container truck lies sideways after crashing into an electric post in Manila. The driver claims the road was slippery. —NIÑO JESUS ORBETA

MANILA, Philippines — Lawmakers have been urged to finalize a law creating an independent body that will investigate transportation-related accidents and dismantle a decades-old system plagued by conflict of interest and other questionable methods.

With bills approved in both houses of Congress for the establishment of a National Transportation Safety Board, advocacy group Safe Travel Alliance said in a media briefer that the time was “ripe for immediate passage.”

The next step for lawmakers is to push forward with the bicameral process following the approval of House Bill No. 9030 on June 1 this year and Senate Bill No. 1077 on Dec. 9, 2019.

From 2018 to 2019, over 238,000 road accidents were recorded in Metro Manila alone, resulting in 766 deaths and tens of thousands of injuries, Safe Travel Alliance said.

There were also thousands of maritime and aircraft-related accidents, including the crash of a C-130 military transport aircraft in Sulu province that killed 50 people in July.

Part of the problem, according to the group that pushes for safety standards in transportation and travel, was the use of poor investigative tools that “very rarely result in policy corrections that prevent future accidents, especially in land transportation.”

Conflict of interest can also emerge when a government regulator is forced to investigate itself over potential lapses.

For example, the Civil Aviation Authority of the Philippines (Caap) has authority over all aviation disasters but when accidents occur, the investigating body will be also led by Caap personnel.

On the other hand, the Maritime Industry Authority investigates sea mishaps while road accidents fall under the jurisdictions of the Philippine National Police, Land Transportation Office and Metropolitan Manila Development Authority.

“This gap in the bureaucracy provides a compelling reason to effect institutional reforms to avoid such conflict of interest, enhance the standards of transportation safety measures, prevent transportation accidents and mitigate dangers to human lives and property,” Safe Travel Alliance said.

Under the proposed law, a nonregulatory and independent agency attached to the Office of the President will be created. It will be the primary agency for conducting impartial probes of transportation accidents with the ultimate goal of improving safety measures and also ensuring the strict implementation of safety standards.

The bills pending in Congress for the creation of the agency have received the backing of a host of industry stakeholders, including the Air Carriers Association of the Philippines, Joint Foreign Chambers, International Air Transport Association and Move Metro Manila.