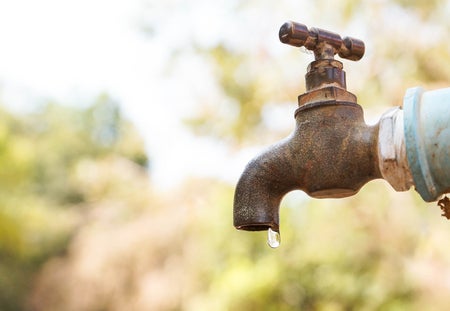 A faucet with a water drop/water consumption concept

MANILA, Philippines — Bills seeking to grant a 25-year franchise to Maynilad Water Services Inc. and Manila Water Company, Inc. are now up for plenary deliberations in the Senate.

Under the Constitution, franchise bills first need to go through the approval of the House of Representatives before it can be transmitted to the Senate for consideration.

“With the grant of this franchise, nawa’y tuluyan nang dumaloy ang ginhawa at maramdaman ng bawat Pilipino ang ‘care in every drop’,” Poe said in her sponsorship speech.

(With the grant of this franchise, hopefully ‘care in every drop’ means a continuous flow of comfort will be felt by Filipinos.)

“We are for the continuity of water services and we have continuously reiterated to our concessionaires our expectation for a better water provider in the new normal,” she added.

The two water concessionaires were granted concession agreements in 1997 for the delivery of water and sewerage services.

The RCA, she said, removes contentious provisions found in the 1997 contract and included provisions beneficial to the consumers.

Poe pointed out that the RCA designates the two water concessionaires as public utilities, thus, they need a congressional franchise to operate.

She added that under the new agreement, there shall be a tariff freeze until December 2022.

The concessionaires are also required to provide alternative water supply to their customers in case of service interruption, according to the senator.

Poe said that failure to comply with these measures will penalize or fine the concessionaires and may be considered as cause for termination of the contracts.

“This is the first time this Committee under my chairmanship will be granting a franchise to a water concessionaire. So for good measure, apart from the House bill transmitted to us, we made use only of the standard provisions in franchises that we have already deliberated and passed on the floor,” Poe added.

This includes the standard provision on “Responsibility to the Public” highlighting the concessionaire’s responsibility to comply with all of its obligations, and to incorporate public participation in its service, she said.

The franchise will also be subject to revocation for failure to operate continuously for two years, noted Poe.

“We recognize that the grant of a franchise is just part of a bigger solution to the water problems in the country and that there is still a need to tap and develop new water sources, improve water supply, distribution, and sewerage systems, and further educate people on water conservation and climate change,” she added.