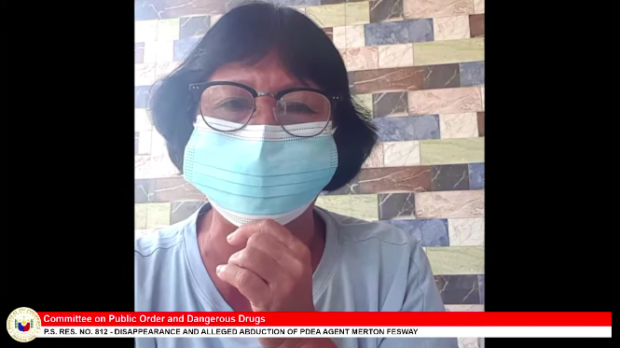 Teresita Tejano Fesway, mother of PDEA agent Merton Fresway, participates in a Senate hearing into the alleged abduction of her son. Screengrab from Senate Youtube livestream

MANILA, Philippines — The mother of an anti-drug agent on Tuesday expressed her dissatisfaction with the Philippine Drug Enforcement Agency (PDEA)’s handling of her son’s case, suspecting that the alleged abduction was a “set-up.”

Teresita Tejano Fesway, who participated in an online hearing of the Senate public order committee, became emotional as she called for justice following the disappearance of her son Merton, a PDEA agent from Samoki, Bontoc, Mountain Province.

(I hope justice will be served. We need justice. We are awaiting the day Merton will come back. Those who know about his disappearance should undergo a lie detector test so they will tell the truth.)

(Their boss there, we were not treated well when we went to their office. That’s why it’s obvious that they’re hiding something, that all of this is just a set-up.)

(He left all his belongings, including his wallet; he should have been carrying these things with him. Someone called him and he went outside and then he disappeared. Why didn’t he return?)

According to the initial investigation, Fesway was supposed to meet a confidential informant before his sudden disappearance on the eve of June 25.

Fesway was alleged to have been abducted by unknown men outside PDEA’s office in Angeles City, Pampanga, where he is assigned.

The PDEA has already formed a task force to investigate Fesway’s case.

While the mother thanked the CIDG and the NBI, she complained that the PDEA had not updated her on her son’s case.

(Thank you to all who helped, CIDG, NBI. The CIDG is giving us updates but we can’t get any from the PDEA.)

(We are not content with their answers to us. When we went to their office, all they told us was ‘OK, OK.’ That’s their answer to us.)

(Just because we’re Igorot, you will treat us like this?)

PDEA, whose officials also attended the hearing online, was not able to respond to Fesway’s mother.

‘I can feel your pain’

Senator Ronald “Bato” dela Rosa, chairman of the Senate public order committee, sympathized with Fesway’s mother and assured her he would constantly ask for updates on the case.

(We can feel the pain. We are also parents. I also have a child in the service, in the police force. I can just imagine that if something happened to my child, I would not accept it. I can feel your pain.)

(Getting justice should go through the proper process. Although the committee is considering your theory, we still can’t conclude that that’s what happened. We still lack some vital information. We need to investigate further.)

Dela Rosa said the inquiry seeks to determine how existing PDEA protocols and procedures could be improved to ensure the safety of law enforcers.