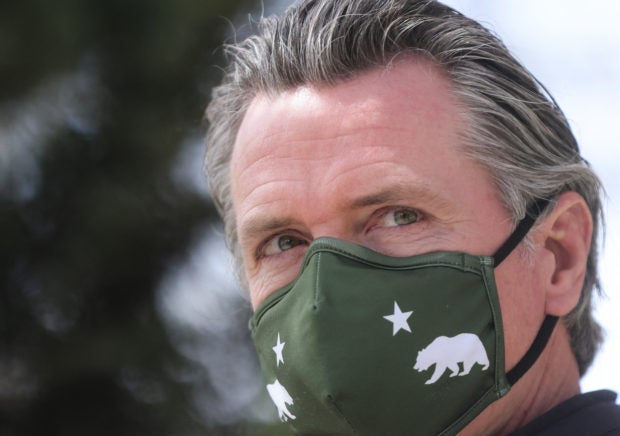 LOS ANGELES — Californians are voting on whether they approve of their democratically elected governor, and if not, who should replace him.

Here is a look at how the recall election works in the most populous and wealthiest state in the United States.

The first is: “Shall Gavin Newsom be recalled from the office of governor?” It’s a straight yes/no requiring a simple majority (50 percent plus one vote) either way.

If the answer is “no,” normal service is resumed, and Newsom serves out the remaining 18 months of his term.

If it’s a “yes,” part two comes into play: “Who should replace him?”

Whoever gets the largest number of votes in that question — regardless of whether that person even wins an absolute majority — takes Newsom’s job.

Not Newsom. The sitting governor is not allowed to put himself forward. His Democratic Party has not endorsed a candidate either, so if he loses, the field is wide open.

Most of the list of 40-odd challengers are Republicans; chief among them is talk radio star Larry Elder, a Black former lawyer who benefited from affirmative action and now rails against it.

There is also a YouTuber called Kevin Paffrath, a self-described Billboard Queen and a Green Party candidate whose manifesto is simply “Can you dig it?”

That majority is not surprising given how heavily California leans left. Registered Democrats outnumber registered Republicans by two to one.

Newsom’s mandate should take him to January 2023.

So why are they voting again now?

Every governor in the last five decades has faced at least one recall attempt. Usually those efforts fail.

But California’s electoral rules mean that the bar to getting a recall up and running is quite low. Malcontents need only gather signatures equivalent to 12 percent of the number of people who voted in the last election — in this case, that figure was 1.5 million.

California’s population is around 40 million.

Attempts to recall Newsom were plodding along and looked like they were going nowhere, even as Covid-19 and the unpopular lockdowns hit.

But then he was snapped having dinner at the swanky French Laundry restaurant without a mask, and with far more people than his own social distancing rules allowed.

That crystallized the idea that he was elitist and out of touch with regular folk, and propelled the petition over the line.

Is everyone happy about it?

Critics say the relatively small number of signatures required to trigger a recall means the process is too easy.

They further charge that the structure of the question means the incumbent could get 49.9 percent of the vote and be out on his ear, while a challenger takes his job by scooping up just 15 percent of ballots.

Democrats complain that the Republican-led recall is an attempt to hijack the state’s government; seizing power in extraordinary circumstances when they could never do it in a regular poll.

Republicans say it’s not partisan, and insist many Californians are annoyed with Newsom’s handling of the pandemic, particularly financially burdened small business-owners, and parents whose children were kept home from school.

Whichever side of the argument they fall, what most people agree is that the cost of Tuesday’s ballot — at around $280 million — is a lot of money.

History is on Newsom’s side.

Only one recall has ever succeeded: bodybuilder-turned-actor Arnold Schwarzenegger ousted unpopular Democrat Gray Davies in 2003.

Arnie, who ended up running the state for more than seven years, was the Golden State’s last Republican governor.

After a shaky start, Newsom now seems set to avoid a similar termination, with respected poll-crunching website fivethirtyeight.com predicting 55 percent will vote to keep him.