Wildfire evacuees tempted not to vote in Canada election 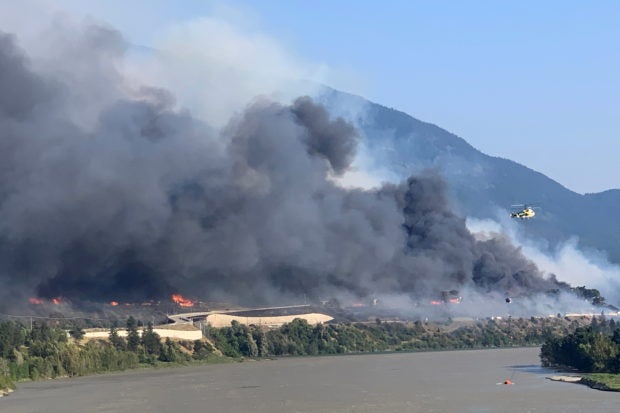 LYTTON, Canada — On the front lines of global warming, evacuees from Lytton, a western Canadian village destroyed by wildfires in June, are detached and bitter about the upcoming September 20 snap elections.

More than two months later the town is deserted, with police checkpoints stopping people, even residents, from entering.

The town is flanked by fences that mask the devastation — a burnt tree, charred cars, the cinder outlines of a house and a single intact road sign.

A rare motorist drives along a highway that runs through the town.

Sitting on a bench outside a bakery in the town of a Lillooet, north of Lytton, Micha Kingston watches her five-year-old daughter Mimi play with her two dolls, some of the few personal items the family saved as they fled their home.

“It’s weird because I do feel like I am a refugee and that’s not something that you associate with Canada, that’s something you think of like somewhere else where there are wars,” she told AFP, gripping a donated pullover with the Vancouver Winter Olympics logo on the front.

Kingston, who is a single mother, and her daughter are among the 250 Lytton residents forced to flee when flames reached the town.

Some 33,000 people in British Columbia have been displaced by forest fires this summer, and nearly 1,600 fires have been recorded in the province, making it the third most devastating season in terms of hectares burned.

One week before Canada’s national election around 200 fires are still active, including the fire that ravaged Lytton.

Those fires were made worse by a heat dome linked to climate change that saw hot air trapped by high pressure fronts over western Canada and United States, a heat wave that claimed hundreds of lives, experts said.

Kingston, whose political leanings have swung between the leftist New Democratic Party and the Green Party, said she is considering not voting for the first time ever.

“Everyone is talking about (climate change), but like nothing ever changes. So, it’s easy to be disillusioned with politics when nothing changes,” she said.

Voting would be “more difficult than usual” because “everything is so crazy right now,” she said, adding that her post-traumatic stress complicates every little task.

Kingston now lives with her daughter in a tent in a friend’s yard, and survives on government food stamps.

“I’m not like angry. I’m more (feeling) disconnected than anything,” she said.

Kingston said she’s grateful for the help she received in securing unemployment insurance from the constituency office of her local Conservative MP, Brad Vis.

Nevertheless she won’t support the Tories in this election due to the party’s weaker climate plan.

For the ruling Liberals to hold an election “after the summer that British Columbia just had is a betrayal to the residents that I represent,” said Vis, who is campaigning for re-election.

Hundreds of displaced locals “are looking for a place to live this winter” and don’t even know how they’re going to be able to cast a ballot on September 20, Vis told AFP.

Elections Canada said it is working with local authorities to make sure people can vote and encourages them to do so by mail.

‘Some kind of hate against B.C.’

Fire evacuee Neil Dycke has been staying in a motel in Kamloops, about 170 kilometers northeast of Lytton, since the fire destroyed his town.

“You can’t blame the politicians” for the wildfires, Dycke said, adding no one could have predicted the fire devastation.

“It’s like someone has some kind of hate against B.C., you know… because there is an awful lot of fires this year, way more than normally and close to towns too.”

Another fire evacuee, Christine Abbott, 56, chokes back tears as she remembers the home she had lived in since 2012 with her husband Vince.

The home, destroyed by the fire, had belonged to her father-in-law.

“The people who are in leadership have to care about the people and I don’t think that’s what’s going on,” she said, sitting on a folding chair outside her camper, parked a short distance from Lytton.

As for Liberal Prime Minister Justin Trudeau, “he’s too busy for us,” so for the first time ever “I might be too busy to vote,” she said.