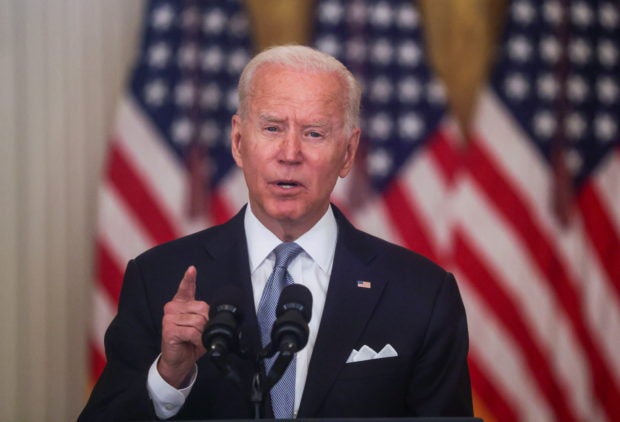 U.S. President Joe Biden delivers remarks on the crisis in Afghanistan during a speech in the East Room at the White House in Washington, U.S., August 16, 2021. REUTERS FILE PHOTO

WASHINGTON — Joe Biden will host the prime ministers of India, Japan and Australia for an in-person summit September 24, the first-ever White House gathering of the “Quad” grouping, the president’s office said Monday.

“The Quad Leaders will be focused on deepening our ties and advancing practical cooperation on areas such as combatting COVID-19, addressing the climate crisis, partnering on emerging technologies and cyberspace, and promoting a free and open Indo-Pacific,” White House spokeswoman Jen Psaki said in a statement.

The diplomatic grouping, seen as a counter to China’s growing influence, held online leaders’ talks in March, and ministers from the four countries have also held in-person discussions.

The White House meeting is expected to be one of the final international summits for Japan’s Prime Minister Yoshihide Suga, who has decided not to stand for re-election.

He will be replaced as head of the ruling Liberal Democratic Party on September 29 ahead of general elections slated for October or November.

Any talks between the four countries would likely touch on the situation in Afghanistan, as well as present a united front between the allies before a G20 meeting in Rome in October, Japanese media said last week.

The Quad grouping is seen as a bid to counterbalance China’s growing economic and military reach in the Asia-Pacific region.