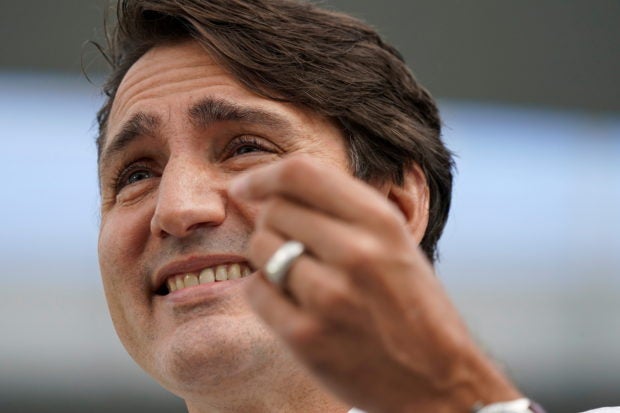 VANCOUVER  – Canadian Prime Minister Justin Trudeau had hoped to secure a majority in parliament when he called a snap election, but a lackluster campaign and public anger over a vote during a pandemic are putting his chances of victory at risk.

Trudeau, in power since 2015, decided to gamble on an early vote and capitalize on his government’s handling of the pandemic, which included massive spending to support individuals and businesses and high vaccination rates.

But with just a week to go until the Sept. 20 election, Trudeau’s Liberals are nowhere near the 38% in public support needed for a majority and could even lose to the Conservatives, led by the relatively unknown Erin O’Toole.

Insiders blame what they call an initially low-energy campaign and the inevitable political baggage that Trudeau, 49, has accumulated since he took office six years ago promising “sunny ways.”

“I wish he hadn’t called it,” a Liberal insider said of Trudeau’s decision to seek an election two years before the end of his term.

Trudeau says he needs a new mandate to ensure Canadians approve of his plan for getting the country past the coronavirus pandemic. The Liberals, whose fiscal policy supports for the pandemic exceed 23% of GDP, plan billions in new spending to support economic recovery if re-elected.

‘BLOOM DEFINITELY OFF THE ROSE’

In mid-August, when the election was called, the Liberals were well ahead of the Conservatives in opinion polls and seemed headed for an easy victory.

That quickly changed and the Liberals spent weeks trailing the Conservatives in the polls before edging back ahead in recent days.

O’Toole, 48, and other party leaders repeatedly condemned the vote call as a cynical power grab during a fourth wave of the pandemic, and those words appeared to have resonated with Canadians, drained by successive lockdowns.

The Liberal campaign stumbled from the start, failing to provide a convincing reason for calling an early election and dogged by missteps like being flagged for manipulating a video of O’Toole talking about private healthcare on Twitter.

Liberal candidates knocking on doors reported increasing fatigue with Trudeau, who gave daily televised briefings for months about what Ottawa was doing to tackle COVID-19.

His domination of the airwaves, once an advantage, has instead led to a sense that the Trudeau brand has grown tired, according to four people directly familiar with the campaign.

“The bloom is definitely off the rose,” said one senior Liberal campaigning in Ontario, the most populous of the 10 provinces. The Liberals hold 75 of the 121 seats there and need another good performance to stay in power.

“There is a fatigue. … People are saying: ‘Just go away, don’t bother me, I want to live my life,'” said the Liberal, who like others being quoted requested anonymity because of the sensitivity of the situation.

During the campaign, every new Liberal promise – including billions of dollars for healthcare or a new plan to help people trying to buy their first home – has been met with questions about why the Liberal government did not do it during six years in power.

Trudeau took office in 2015 thanks in part to support from progressives, who liked his promises of action to combat climate change, boost women’s rights and help the marginalized indigenous population.

But since then, Canada’s emissions of greenhouse gases have climbed ever higher and the government bought an oil pipeline to ensure crude could keep flowing.

“Progressives have fallen out of love with us,” another senior Liberal said.

The re-emergence of ethics scandals has added to the campaign’s woes.

On Saturday, excerpts of a new book by his former justice minister, Jody Wilson-Raybould, were published, saying Trudeau had wanted her to lie to the public in 2019. Trudeau denied the accusation.

“As you work hard for Canadians, over the years, you end up carrying a number of things,” Trudeau told reporters.

In 2019, he was censured for violating ethics rules by pressuring Wilson-Raybould in a corporate legal case before the previous election.

The Liberal leader, however, is a veteran on the hustings. As the eldest son of longtime Liberal Prime Minister Pierre Trudeau, he has spent his life in the public eye.

During the 2019 campaign, which threatened to blow up after old pictures of him in blackface emerged, Trudeau fought back and secured a minority government.

Trudeau aides had long expressed confidence he would pull ahead toward the end of the campaign after two nationally televised debates last week.

“Momentum is building,” said a senior campaign official, who is privy to internal polling.

As Trudeau campaigned on Saturday in a Quebec constituency held by the separatist Bloc Quebecois, people thronged to him for selfies and elbow bumps as he worked the crowd.

Trudeau has inherent political instinct and a “combination of celebrity and brand name,” said Alex Marland, a professor and expert on political communications and branding at Memorial University of Newfoundland.

“Hardly any leaders have the Trudeau magic. … It’s almost not fair.”