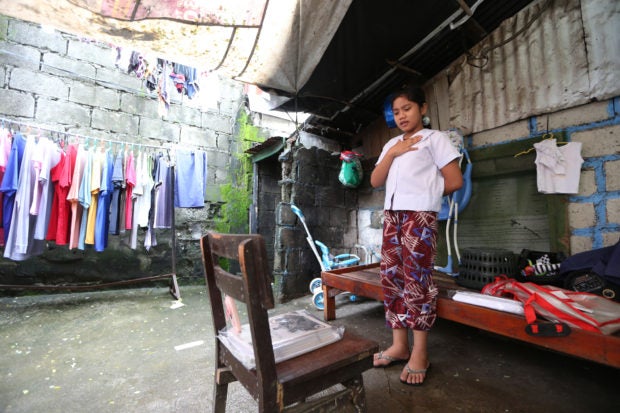 BACKYARD ‘CAMPUS’ Princess Joy Lumabi, a Grade 5 student of President Corazon Aquino Elementary School in Quezon City, sets up her smartphone on a chair in their backyard at Barangay Batasan as she joins her teachers and classmates in the flag ceremony for the first day of classes on Monday. —NIÑO JESUS ORBETA

Although always willing to help her child who is in Grade 7 at New Era High School in Quezon City, Adolfo, 43, and a mother of two, feels frustrated. She completed only her second year in high school, and cannot grasp some of the new lessons in Princess’ classes.

“This adds to my stress as a parent, and it saddens me that I can’t even help my own daughter in her lessons. If her questions require only basic knowledge, then I can help her. But beyond that, I have to ask her sister for assistance,” says Adolfo, referring to 19-year-old Patricia, now a college sophomore.

Adolfo admits that Princess is nervous about yet another year of distance learning.

Virtual lessons are nothing like the interaction between students and teachers in physical classrooms. Students like Princess and her classmates can no longer raise their hands and have their questions, including follow-up ones, immediately addressed.

In online classes, teachers allow only a limited time for clarifications, and often it’s not enough for certain students.

“When I told her that classes will again be conducted online this school year, Princess said she was nervous … She still very much prefers face-to-face classes,” Adolfo says.

In-person classes are among the casualties in the pandemic-hit education system.

The Department of Education (DepEd) has implemented a faulty remote learning setup nationwide, which put at least 1.1 million children out of school in 2020 alone.

A number of other countries have the pandemic under control, enough to reopen schools. But here, COVID-19 is still on the heels of education stakeholders.

A Sept. 8 report by the United Nations Children’s Fund (Unicef) states that by the end of the month, the Philippines will be one of only two countries worldwide that have not resumed face-to-face classes since the pandemic was declared in March 2020.

The list is down from five countries, three of which will be reopening schools this month, according to Unicef Philippines education chief Isy Faingold.

Classes in all levels will gradually reopen in 1,460 schools in Kuwait, and face-to-face classes resumed for Grades 5, 10 and 12 students on Sunday in Bangladesh.

At this writing, only the Philippines and Venezuela do not have an exact date for school reopening, even as education stakeholders fear further learning loss.

The threat posed by the highly transmissible Delta variant of COVID-19 has discouraged even President Duterte from ordering the fast-tracking of in-person learning.

The DepEd, along with the Department of Health, has drawn up new guidelines for limited face-to-face classes at 100 public schools and 20 private schools in low-risk areas, but it has yet to present these to Mr. Duterte.

The guidelines have not been made public.

By law, as Education Secretary Leonor Briones repeatedly points out, the President has the final say on the learning of at least 27 million Filipino students.

But, at the very least, the government must reopen limited face-to-face classes in areas that are classified as low-risk or have no COVID-19 cases at all, says Liza Marie Campoamor Olegario, an education psychologist.

“Because they are in secluded areas, there are less people. What teachers can do is meet with a few of their students at least once a week,” says Olegario, who also serves as research head of the Movement for Safe, Equitable, Quality and Relevant Education.

Teachers may also consider grouping a small number of students in a certain area with a better internet signal. In this way, they can simultaneously attend online classes, Olegario says.

For Aurea Montemayor, whose 16-year-old son is a Grade 11 student at Urdaneta City National High School in Pangasinan province, learning is “more and much better in face-to-face classes.”

Her only child, Francis Dave, often scrambles to find an area in and outside their home with a strong signal for his online classes—on some days, he is seated under a bamboo tree in the blistering heat—and this eats up time that should be dedicated to learning.

“We can’t afford to install Wi-Fi in our home, so we rely solely on mobile data. Sometimes the signal is so weak that Francis lags behind in his classes,” Montemayor says. “Face-to-face classes are so much better.”

Reopening 120 basic education schools amid the pandemic is a race against time for the DepEd.

A majority of public and private school teachers are willing to hold weekly classes with their students provided that safety and health protocols are followed, according to a focus group discussion conducted in August by Aral Pilipinas, a coalition of education stakeholders and civil society groups.

Most teachers are in support of physically reopening schools although others are still cautious due to the coronavirus.

“When we ask them about the possibility [of conducting in-person classes] in the future, they agreed, given certain conditions, because they recognize the need to physically meet students for proper teaching, intervention, remediation, and support,” says Reg Sibal, Aral Pilipinas lead convener.

Teachers say in-person classes will cut their workload, as they will not be required to do frequent house-to-house visits when they sometimes reteach lessons to their students and shell out transportation funds from their own pockets, Sibal says.

According to an April 2021 report released by Asian Development Bank, most economies in developing Asia have implemented partial school closures, such as in certain regions only, or for some grade levels and age groups.

To prevent any further learning setback, Sibal says, there must be a phased and safe reopening of schools, in which all sectors—and not just the DepEd—work together in implementing policies.

“There should be some level of preparation and mechanisms [in place] to support the home and the community. If schools do reopen, we have to recognize that a child must be supported at home and in school,” Sibal says.

The DepEd insists that blended learning is here to stay—at least for the current school year—and recognizes that the resumption of classes is a shared responsibility that must be “joyfully implemented” with other sectors, including transportation, health, and infrastructure.

This stance is backed by Aral Pilipinas’ July 27 letter to the President, in which it notes that ensuring safe and healthy schools “is at the crux of the phased reopening” of classes, and requires that multiple elements be put in place, such as infrastructure, safe mobility and communities, and contingency planning.

Sibal reiterates that the responsibility of ensuring quality education must be laid squarely, not only on teachers and education advocates, but on the entire country.

“They say it takes a village to raise a child. But it takes an entire country to raise a successful Filipino citizen … We have to continue to advocate for education because we’re not just talking about children. We are talking about the future—our country’s future,” she says.

Parents like Adolfo and Montemayor share this position: The government has to prioritize efforts for the resumption of face-to-face classes, or their children’s future will be put in peril.

“As parents, we love our children. We want nothing for them but their safety because they are our life,” Montemayor says. “If we are uncertain when the pandemic will end, then when are we going to reopen schools?”