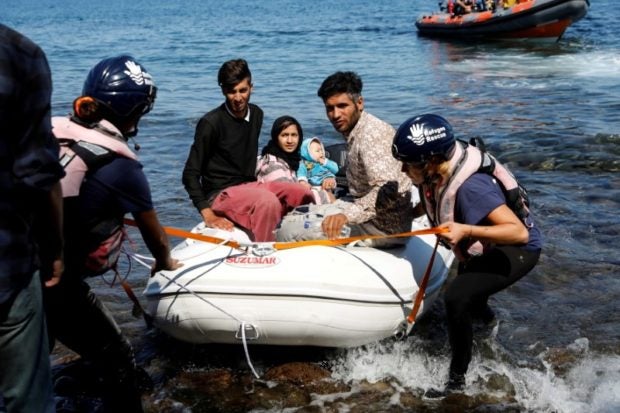 A small inflatable boat carrying migrants from Afghanistan is towed by rescuers of the Refugee Rescue NGO, near Skala Sikamias, on the island of Lesbos, Greece, September 16, 2019. REUTERS FILE PHOTO

LEROS, Greece — In a tented courtyard in the migrant camp on Greece’s Leros island, a dozen new arrivals await registration after two weeks in Covid-19 quarantine.

“You can submit a claim for asylum, but only in Greece,” a young Greek official tells them through a translator, as armed police stand watch.

“If you do not, you will be sent back to your home country,” he adds.

After being searched, the mainly Somali migrants — including several women, a baby and an elderly man on prosthetic legs — are photographed, fingerprinted and rigorously interviewed.

With the support of EU equipment and personnel, Greece has stepped up its security safeguards since the November 2015 Paris attacks when jihadists killed 130 people in suicide bombing and gun assaults.

Planned in Syria, the attack was later claimed by the Islamic State group. The last surviving assailant went on trial last week in France.

Two of the attackers had passed through Leros on fake Syrian passports on October 3, 2015, posing as refugees.

Six years on, Greek officials say they have sealed off avenues of illegal entry.

Leros camp manager Filio Kiprizoglou says she is “100 percent” confident any would-be extremists can be intercepted.

“The procedures are instantaneous,” she said, adding it takes “five minutes” to get confirmation on a possible suspect from Greek and European security databases.

The EU has committed 276 million euros ($326 million) for new camps with stricter access measures on the five Aegean islands — Leros, Lesbos, Kos, Samos and Chios — that receive most of the migrant arrivals by sea from neighboring Turkey.

The new Leros camp, expected to be finished next month, will have magnetic gates, x-ray machines, cameras and a pre-deportation holding facility, Kiprizoglou said.

Procedures for relocating asylum seekers who arrive on Greece’s shores to other EU countries have also been upgraded since the height of Europe’s migrant crisis in 2015.

“When people arrive by boat, each person must be heard individually,” Mireille Girard, the UN refugee agency’s representative in Greece, said.

“They may not be a refugee, but you will only know that by questioning them.”

Taher, a young Syrian man from Aleppo, told AFP that when he applied for relocation to France in 2016, he faced a gruelling, six-hour interview with French agents who flew to Greece to vet his application.

“They wanted me to admit things I had never done… they wanted information on weapons used by the Syrian army, asked if I had known anyone who was radicalized. At one point, they hinted that I had already travelled to France, which was totally untrue,” he told AFP recently.

Taher was eventually denied entry into France for “security reasons”. He had to apply for asylum in Greece, which he obtained, and now works as a translator in Athens.

In February 2016, the EU noted “serious” Greek deficiencies in controlling the influx into the country.

Greece was the main point where the more than one million asylum seekers — mainly Syrians, Iraqis and Afghans — entered Europe the previous year.

But many Greek officials still bristle at the suggestion that they were negligent in guarding Europe’s borders in 2015, during the highest migration flow since World War II.

More than 800,000 of the arrivals that year came through Greece, according to the International Organization for Migration.

At the time, the country was still struggling from a crippling debt crisis.

Zaharoula Tsirigoti, a retired police general who then headed the country’s migration response, said that not only had the Greek state been forced by its international creditors to severely cut back on civil servants — asylum service staff especially — but its EU peers at first ignored pleas for help.

In summer 2015, up to a thousand migrants a day were landing at Leros, one of the smallest islands of the Dodecanese chain, Tsirigoti told AFP.

“The European Union was wagging its finger at us, but we had no support in personnel and infrastructure,” she said.

Leros at the time had a single Eurodac fingerprint database terminal and it took two days to get an identification match, Tsirigoti said.

Germany donated a dozen Eurodac units in October 2015 — just days after the attackers had sneaked through Leros — and other European authorities followed suit.

In the years that followed, Greek naval patrols were also beefed up with crews from the EU border agency, Frontex.