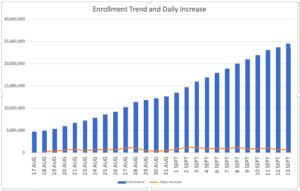 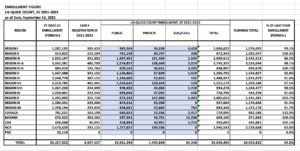 MANILA, Philippines — A total of 24,603,822 learners have enroled for school year 2021-22 which kicked off on  Monday, the Department of Education (DepEd) reported.

“Taking into consideration the reporting lag and several regions already surpassing 100% of last year’s enrollment, there is indication not only of our learners from last year continuing this year, but also that some of our learners who opted to skip last SY are coming back,” Education Undersecretary Nepomuceno Malaluan said.

Data showed that Calabarzon (Cavite, Laguna, Batangas, Rizal, Quezon) logged the most number of enrolees at 3,226,044 while the Cordillera Administrative Region had the least with 445,681.

On the other hand, 198,297 were listed under the alternative learning system for this school year. This is 33.08 percent of last year’s 599,365 registrants, a separate enrolment count showed.

Blended learning will still be implemented as the government seeks to prevent COVID-19 transmission in in-person classes.

Yet another challenging year for public school teachers

120 schools lined up for proposed pilot face to face classes