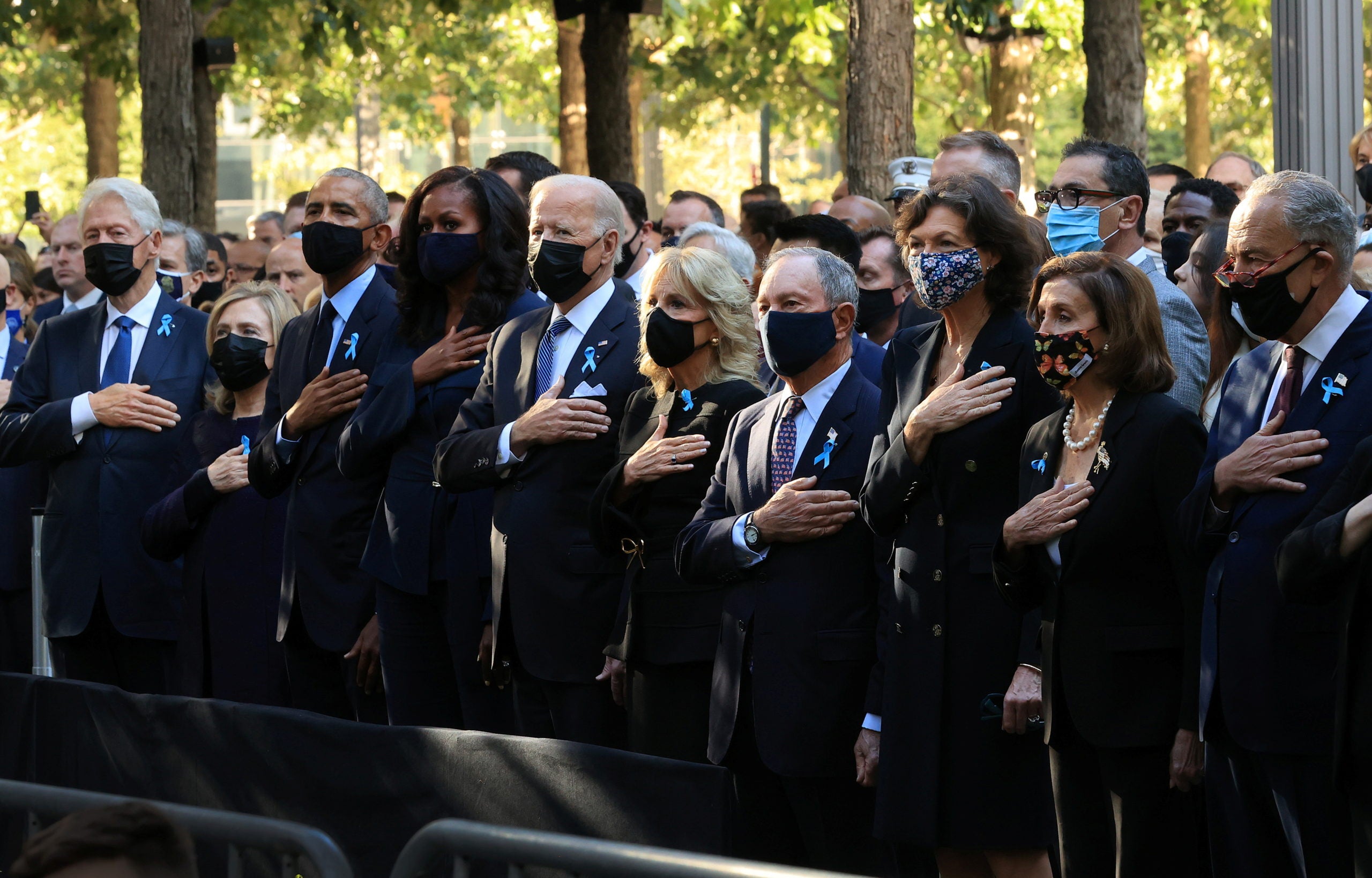 SHANKSVILLE, Pa./ ARLINGTON, Va. — President Joe Biden commemorated the 20th anniversary of the Sept. 11 attacks on the United States on Saturday with visits to each of the sites where hijacked planes crashed in 2001, honoring the victims of the devastating assault.

In the first of his wordless tributes, Biden stood in somber silence with former Presidents Barack Obama and Bill Clinton at the New York City site where planes brought down the World Trade Center’s twin towers.

The three leaders, flanked by Jill Biden, Michelle Obama and Hillary Clinton, shared a moment of silence with the crowd at 8:46 a.m. EDT to mark the time that the first plane hit, heads bowed. They listened as relatives read the names of those who died.

The Bidens then flew to Shanksville, Pennsylvania, before heading back to the Washington area to visit the Pentagon memorial.

Nearly 3,000 people died in the attacks in New York, at the Pentagon in Arlington, Virginia, and in Pennsylvania, where passengers on United Airlines Flight 93 overcame the hijackers and the plane crashed in a field, preventing another target from being hit.

Biden did not deliver remarks at any of the sites. He released a video on Friday to express his condolences to the loved ones of the victims and highlight the national unity that resulted, at least initially, after 9/11.

“The core of who we are is not divided,” Biden said Saturday during a visit to a fire station after the Shanksville ceremony.

In New York, on a clear, beautiful day similar to the weather 20 years ago, the New York Police Department pipes and drums band played “Hard Times Come Again No More,” an American folk song from the 1850s. Bruce Springsteen, playing an acoustic guitar, sang “I’ll See You in My Dreams.”

Rudy Giuliani, mayor of New York at the time of the attacks, attended the ceremony. Former President Donald Trump, a New York native, did not.

In Shanksville, the Bidens participated in a wreath-laying ceremony at the Flight 93 National Memorial where names of the dead are etched on a white marble wall.

The passengers who stormed the cockpit had stepped up in a crisis, Biden told reporters later. “That’s genuine heroism,” he said. He praised a speech given in Shanksville earlier in the day by former President George W. Bush, the Republican who had been in office less than a year when the hijacked planes changed the country, and the world.

In a rare public address, Bush warned of the threat from domestic terrorism. He recalled how Americans came together after the attacks and urged a spirit of greater unity amid growing political division in the country.

Bush also urged a common front against violent extremists both domestic and foreign, saying “they are children of the same foul spirit, and it is our continuing duty to confront them.”

Biden’s last visit of the day was to the Pentagon, the symbol of U.S. military might that was pierced by another of the planes used as missiles that day.

The Bidens, Vice President Kamala Harris and second gentleman Doug Emhoff touched a memorial wreath at the site where a series of benches have been erected representing each of the 184 victims. They put their hands on their hearts, with Biden raising his in a salute, while “Taps” played.

The anniversary comes shortly after the end of the U.S.-led war in Afghanistan that Bush launched 20 years ago to root out the al Qaeda militant group that carried out the 9/11 attacks.

Biden’s withdrawal of U.S. troops in August, months after a deadline set by his Republican predecessor Trump, and the resulting rapid fall of the country  to the Taliban has drawn criticism from members of both political parties.

Trump, a divisive figure who did not attend any formal Sept. 11 tribute, appeared instead at a friendly police precinct near his Manhattan home.

In stark contrast to the messages of unity, the former president criticized Biden over the Afghanistan withdrawal, repeated his false claim of 2020 election fraud and hinted he may take another run at the White House.

U.S. presidents often travel to one of the three sites on the 9/11 anniversary but it is unusual to go to all three on the same day.

In his video address, Biden noted the heroism that was seen in the days following the attacks 20 years ago. “We also saw something all too rare: a true sense of national unity,” Biden said.

Biden, a Democrat, pledged to build up such unity after he took office in late January, but the country remains deeply split politically.

Last month, many families of 9/11 victims asked Biden to skip 20-year memorial events unless he declassified documents they contend will show Saudi Arabian leaders supported the attacks. Last week, the president ordered the Department of Justice to review documents from the FBI probe into the attacks for declassification and release.

US honors 9/11 dead on 20th anniversary of attacks