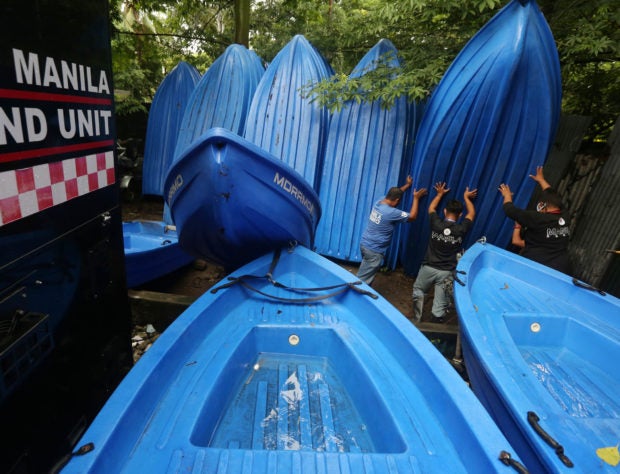 MANILA, Philippines — The weather will likely improve in most parts of the country this week after Typhoon Kiko (international name: Chanthu) veered away from the country, but the weather bureau reminded the public that the southwest monsoon will continue to prevail as usual at this time of the year.

The Philippine Atmospheric, Geophysical and Astronomical Services Administration (Pagasa) said in its weekly weather outlook that some parts of the country would continue to experience stormy weather until Kiko exits the Philippines on Sunday evening on its way to Taiwan.

Kiko was spotted 220 kilometers east of Tuguegarao City in Cagayan on Saturday afternoon with maximum winds of 195 km per hour and gusts of up to 240 kph. It was moving west-northwest at 20 kph and was expected to bring scattered rain showers and thunderstorms in northern Luzon.

Generally fair weather is expected for most of the country as early as Monday with no new weather systems expected to develop within the week.

The looming departure of Kiko was a welcome relief for most of northern Luzon after at least 14 people were killed, while 10 others were reported missing in the aftermath of Severe Tropical Storm “Jolina” (international name: Conson).

The National Disaster Risk Reduction and Management Council (NDRRMC) reported on Saturday that at least 20 other people were reported injured while damage to agriculture was estimated at P190.9 million, with Eastern Visayas most hit with damaged crop areas amounting to P65.6 million.

Damage to infrastructure was estimated at P30.7 million, with Bicol Region incurring the most damage at P29.3 million.

According to the NDRRMC, 140,444 individuals or 37,022 families from eight regions—Central Luzon, Calabarzon, Mimaropa, Bicol Region, Western Visayas, Eastern Visayas, Soccsksargen and National Capital Region—were affected by Jolina, which made landfall eight times from Sept. 6 to 8.

More than 7,600 families were displaced by Jolina, with 5,341 still remaining in evacuation centers.

Jolina intensified to typhoon level at its peak on Sept. 6, before it weakened into a severe tropical storm.

Pagasa, however, warned that people should remain alert to the developing situation, particularly in Batanes province, which was still under various storm signals on late Saturday.

Pagasa also warned of storm surges reaching 1-2 meters. Rising seawater, along with high waves from the shoreline moving inland, may cause flooding in low-lying coastal localities of Batanes.

Read Next
2022 polls seen as a survival issue for Filipinos
EDITORS' PICK
Legarda emphasizes role of ICC/IPs in nation building this IP month
FDA reviewing COVID-19 vaccines’ EUA for booster shots
Biden vows to stand with Asia on freedom, hits at China on Taiwan
NCR’s COVID-9 alert level may be downgraded from 3 to 2 soon — DOH
Work-From-Home is here to stay and requires reliable logistics
Climate Change Commission and Nestlé PH to discover sustainability-focused solutions
MOST READ
Drivers now required to take driver’s education upon license renewal – LTO
Can Marcos Jr. be disqualified?
Marcos Jr’s ‘special diploma’ from Oxford: You can have it, too
Gordon to Duterte: You? Teaching me courtesy?
Don't miss out on the latest news and information.