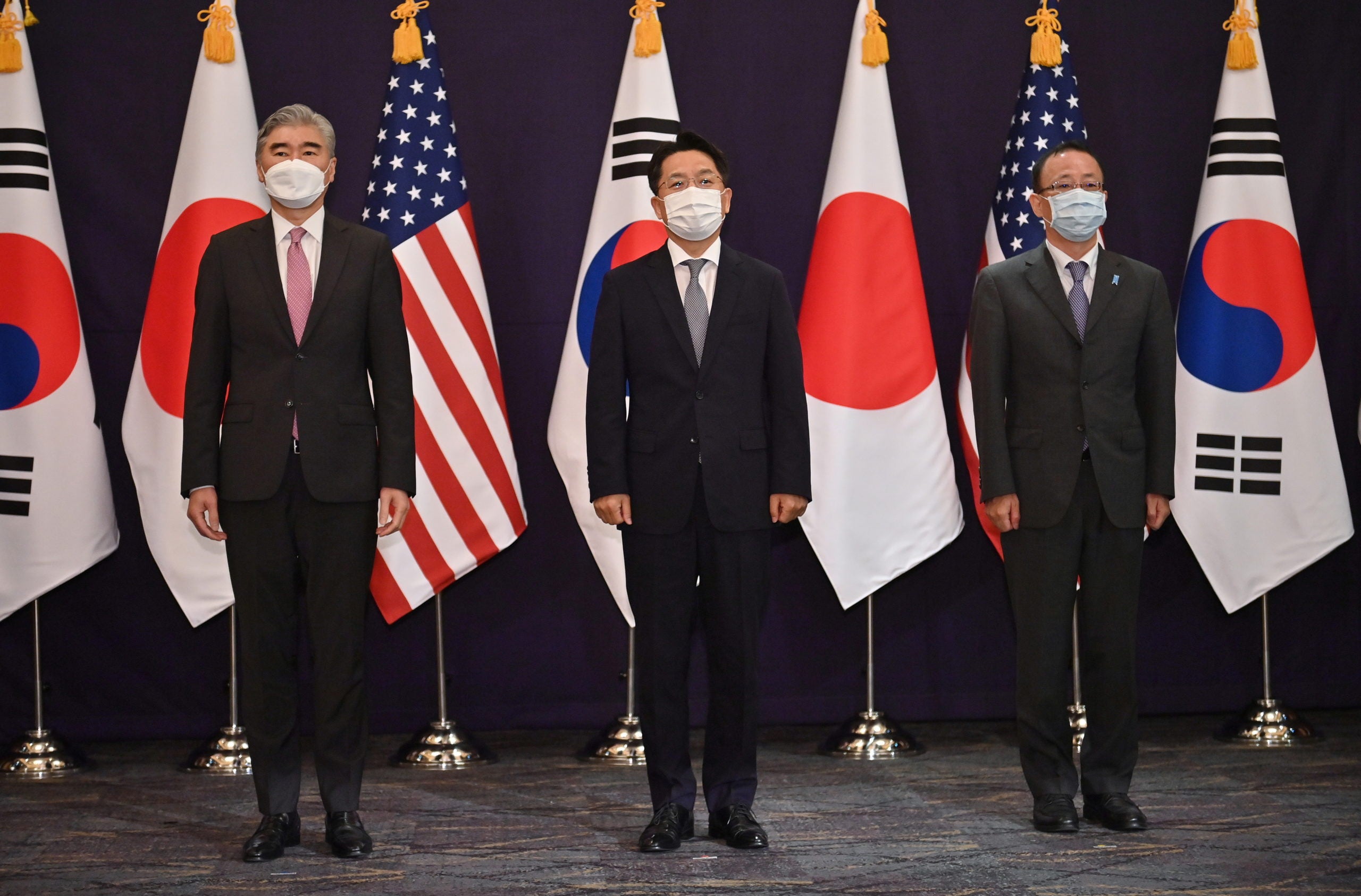 FILE PHOTO: Sung Kim (L), US Special Representative for North Korea, Noh Kyu-duk (C), South Korea’s Special Representative for Korean Peninsula Peace and Security Affairs, and Takehiro Funakoshi (R), Director-General of the Asian and Oceanian Affairs Bureau of the Ministry of Foreign Affairs of Japan, pose for a photo during their trilateral meeting at a hotel in Seoul, South Korea June 21, 2021. Jung Yeon-Je/Pool via REUTERS

SEOUL — Officials from the United States, South Korea and Japan will hold a meeting on North Korea next week in Tokyo, South Korea’s foreign ministry confirmed on Friday.

The three countries have been discussing ways to break a standoff with North Korea over its nuclear weapons and ballistic missile programmes, which have drawn international sanctions.

Noh Kyu-duk, Seoul’s special representative for Korean peninsula peace and security affairs, will travel to Japan on Sunday for a three-day visit, the ministry said in a statement.

While there, he will meet with U.S. envoy for North Korea Sung Kim, and Takehiro Funakoshi, director-general of the Japanese foreign ministry’s Asian and Oceanian Affairs Bureau.

The officials will discuss the North Korean nuclear issue as well as cooperation between their countries, Seoul said.

“The three countries are expected to have in-depth discussions on ways to promote cooperation to stably manage the situation of the Korean Peninsula and resume the peninsula peace process at an early date,” the statement said.

A statement from the U.S. State Department said Sung Kim would travel to Tokyo from Sept. 13–15 and would discuss “the U.S. commitment to the complete denuclearisation of the Korean Peninsula” and the issue of Japanese citizens abducted by North Korea.

U.S. President Joe Biden’s administration has said it will explore diplomacy to achieve North Korean denuclearisation, but has shown no willingness to ease sanctions.

During a visit to Seoul in August, Sung Kim said he was ready to meet with North Korean officials “anywhere, at any time”.

Pyongyang has also said it is open to diplomacy, but that it sees no sign of policy changes from the United States, citing issues such as sanctions as well as joint military drills with South Korea.