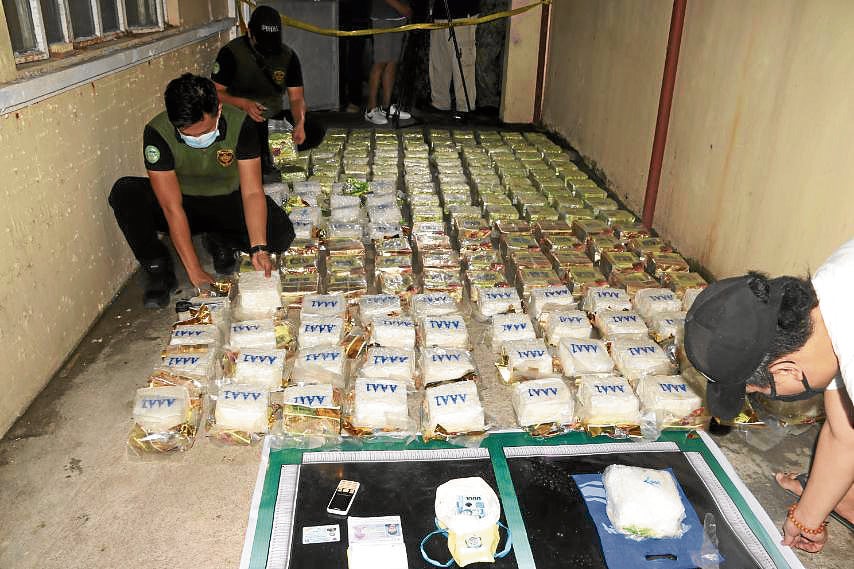 Antinarcotics operatives killed two drug traffickers and seized P1.58-billion worth of “shabu” (crystal meth) in two operations on Thursday in Cavite province, which were connected to Tuesday’s multibillion-peso drug operations in Zambales and Bataan provinces.

The fatalities were identified as Basher Bangon, 59, and, Danilo Untavar, 51. Two other —couple Lani and Aldwin Micoleta—were arrested.

Operatives led by the Philippine Drug Enforcement Agency (PDEA) seized 48 kilos of shabu, valued at P331.2 million, from the Micoleta couple in a buy-bust on Topacio Street, Barangay Magdalo, in Imus City around 9:15 p.m. on Thursday.

Around 9:30 p.m., another operation at a warehouse in Bacoor, Cavite, netted for authorities 181 kilos of shabu worth P1.25 billion.

The operation led to the killing of Bangon and Untavar, after they shot it out with authorities, according to authorities.

Danao said the illegal drugs could be used by other criminal groups to finance their activities related to the upcoming elections next year.

In a statement on Friday, Philippine National Police chief Gen. Guillermo Eleazar said Bangon was tagged as a top-level drug personality with direct contact with an international drug syndicate. His main market were areas in the Visayas and Mindanao.

The Micoleta couple were reportedly cohorts of Bangon. They were known distributors of illegal drugs in Metro Manila and Calabarzon (Cavite, Laguna, Batangas, Rizal and Quezon) areas.

The interagency operations—composed of the PNP, the PDEA, the Intelligence Service of the Armed Forces of the Philippines, the Bureau of Customs and the National Intelligence Coordinating Agency—were able to halt the transport of Chinese-labeled packs which are about to be distributed to the southern part of the country.

According to Eleazar, the two police operations were part of the follow-up drug busts in Zambales and Bataan on Sept. 7 that led to the seizure of P4 billion of shabu and the killing of four Chinese drug traffickers, including Xu Youhua, who was tagged as the main contact of an international drug syndicate in the country that brought drug in through the seawater off Zambales.

In addition to the 580 kilos of shabu confiscated in the Tuesday drug busts in Zambales and Bataan, the Cavite operations brought the total shabu seized to 808 kilos, with a street value of P5.5 billion—the biggest drug haul for this year so far, Eleazar said.

With the reported smuggling of more than a half-ton of shabu through Zambales, police in Quezon province were ordered to monitor the province’s coastline for the presence of suspicious sea vessels.

Police Col. Joel Villanueva, Quezon police chief, said fisher and residents in coastal villages were asked to immediately report to authorities on the presence of dubious strangers and sea vessels in their fishing grounds.

According to PDEA chief Wilkins Villanueva, the illegal drugs were likely brought into the country by speedboats that picked them up from ships in international waters.

Quezon coastlines had been known in the past to be a drop-off point for shabu shipments. Thirty-four of Quezon’s 42 towns are coastal—17 along Lamon Bay in the Pacific Ocean, 12 off the Tayabas Bay facing the China Sea and five along the Ragay Gulf.

Another group of Quezon fishers also recovered in the area a “sophisticated, high-tech” tracking device used in monitoring drug shipments.

In August 2000, government forces arrested six Chinese nationals who were smuggling 365 kilograms of shabu, worth P730 million in the Tayabas Bay coastline in Sariaya town. —WITH A REPORT FROM DELFIN T. MALLARI JR.