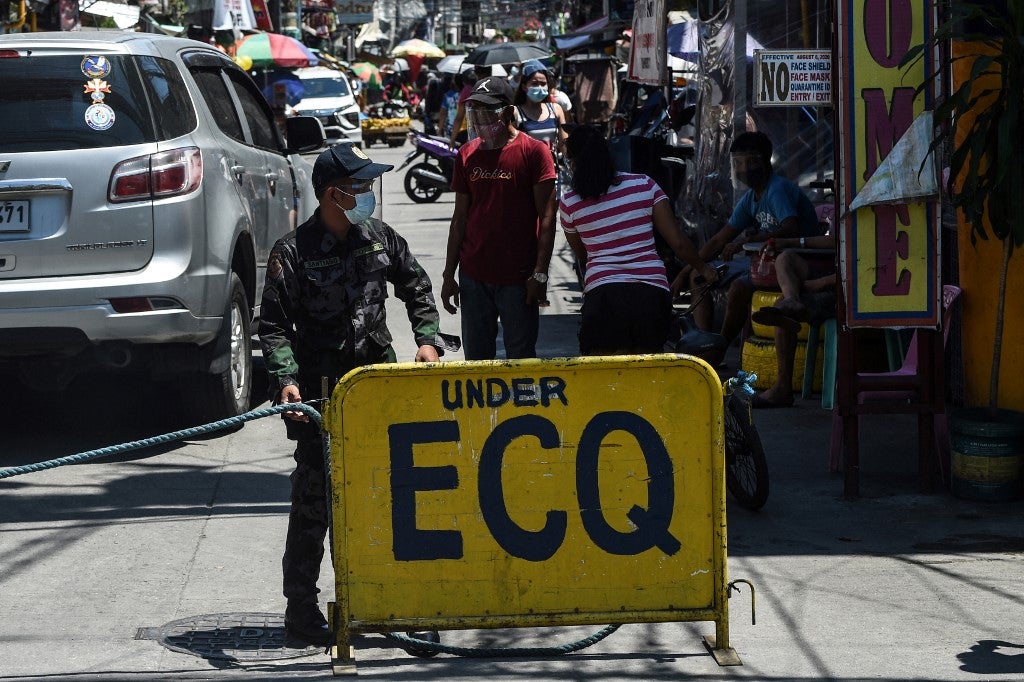 (FILE) This foreboding sign for many residents of packed Metro Manila communities will be a familiar sight again as the metropolis goes on enhanced community quarantine or ECQ from August 6-20, 2021. FILE PHOTO/AFP

This was after the Inter-Agency Task Force for the Management of Emerging Infectious Diseases (IATF) “provisionally” approved the guidelines for the pilot implementation of the alert levels system under granular lockdowns in Metro Manila.

(In accordance with our policy shift, there will only be two quarantine classifications. This is ECQ and GCQ that will be imposed by the IATF.)

(But what used to be allowed or not allowed during GCQ won’t be the same anymore. What’s allowed and not allowed will depend on the alert level to be imposed in areas within Metro Manila. This will be per city or municipality.)

Since March 2020, the IATF has been imposing various quarantine levels in parts of the country from the most lenient to the strictest—modified GCQ, GCQ, modified ECQ, and ECQ.

As previously explained by the Metropolitan Manila Development Authority (MMDA), the four-level alert status will determine if establishments in closed areas, crowded areas, and those that involve close contact activities or “3Cs” will be allowed to operate and at what capacity.

Under Alert Level 4 or the strictest status, Roque said dine-in and personal care services will not be allowed to operate.

As presented by Interior Undersecretary Epimaco Densing in the same press briefing, persons under 18 years old and over 65 years old along with persons with comorbidities, those immunodeficient, and pregnant women will not be allowed to go outside.

The movement of persons is generally allowed under Alert Levels 1 to 3 unless local government units (LGUs) set certain restrictions.

On the operations of private establishments, Densing said minimal on-site capacity with work-from-home and other flexible work arrangements will be enforced under Alert Levels 2 to 4.

Densing added that private establishments may resume operations at full capacity, provided they follow minimum public health standards, under Alert Level 1 or the most lenient status. The same goes for the operations of government agencies under the said alert level.

Roque said the IATF is still finalizing details for specific businesses and activities allowed under the four levels of the alert system.

The pilot implementation of the granular lockdown strategy in Metro Manila was earlier postponed. The modified enhanced community quarantine over the region was instead extended amid the high number of COVID-19 cases.