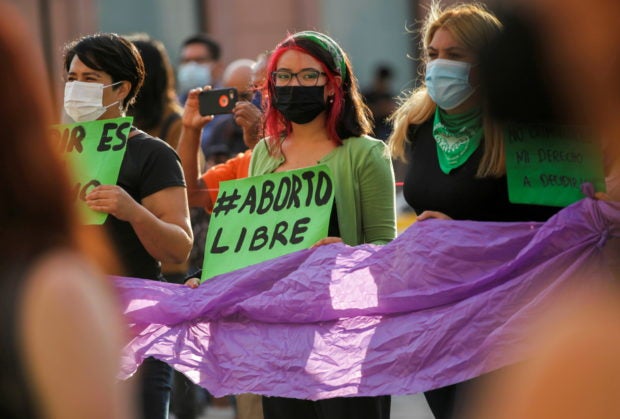 FILE PHOTO: A woman holds a banner that reads “Free abort” during a protest to celebrate the decision of the Supreme Court of Justice of the Nation (SCJN) that declared the criminalization of abortion as unconstitutional, in Saltillo, Mexico September 7, 2021. REUTERS/Daniel Becerril

MEXICO CITY — Mexico’s Supreme Court ruled Thursday that the protection of “life from conception” was unconstitutional, doubling down on its decision earlier this week that abortion was not a crime.

The ruling, stemming from a case out of Sinaloa state, has implications for Mexican states that have laws to defend a right to life from conception and put women at risk of prosecution for aborting a pregnancy.

The court’s decision, another blow to conservatives in the predominantly Catholic nation, came days after its watershed ruling that penalizing abortion is unconstitutional, a major victory for reproductive rights activists.

Hundreds of mostly poor Mexican women have been prosecuted for abortion, while at least several dozen remain jailed.