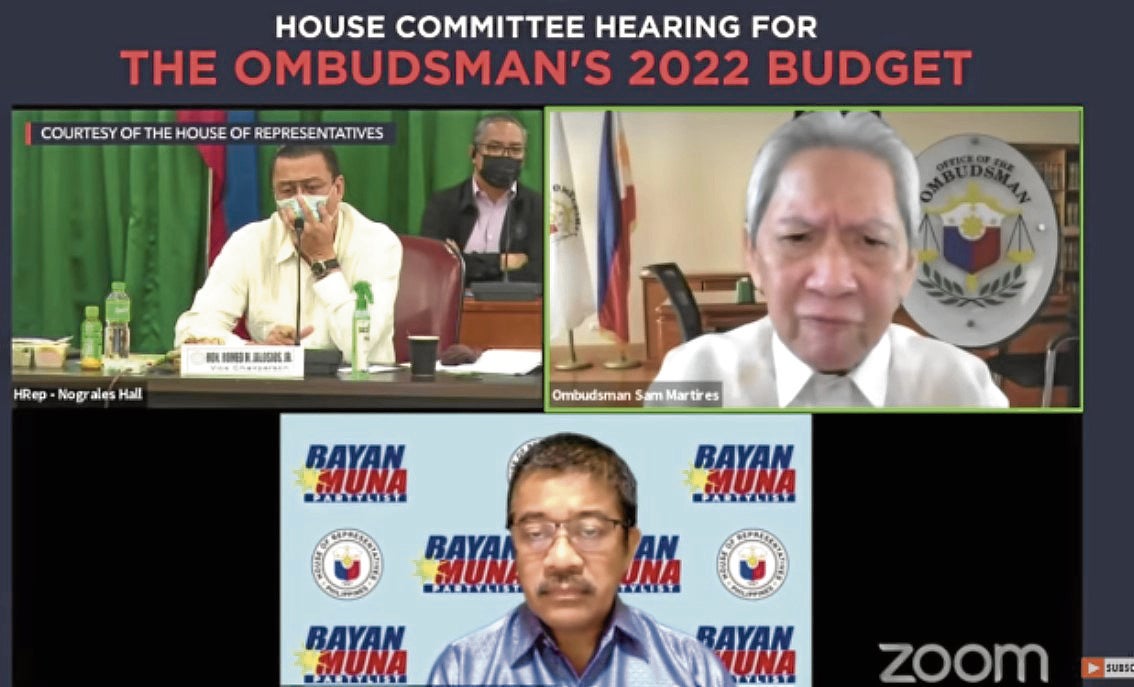 Ombudsman Samuel Martires on Thursday pushed for tough penalties, including jail time of five years, on anyone who would comment on the statements of assets, liabilities and net worth (SALNs) of government officials and employees, claiming that these public documents were being weaponized to destroy people’s reputations.

Martires made the remarks during a hearing on the proposed P3.967 billion 2022 budget for the Office of the Ombudsman after he was asked by Bayan Muna Rep. Carlos Isagani Zarate when he would release President Duterte’s SALN.

Martires, who retired early from the Supreme Court to succeed Ombudsman Conchita Carpio Morales three years ago, said Republic Act No. 6713, or the Code of Conduct and Ethical Standards for Public Officials and Employees, should be amended to fortify the restrictions on the SALN.

He said the provisions of RA 6713 were “very clear” that SALNs were only for publication and not for commentary.

“So, what I’m proposing is to make stringent penalties that anyone who makes a comment on the SALN of a particular government official or employee must likewise be liable for at least an imprisonment of not less than five years. No more, no less,” he told the lawmakers.

In September 2020, Martires issued Memorandum Circular No. 1, restricting the release of SALNs. He directed their release only if the request was made by the government official, or his or her official representative who filed it; if it is legally ordered by the court in relation to a pending case; and if it is made through the Office of the Ombudsman’s field investigation office for the purpose of a fact-finding probe.

“In the absence of compliance with any of these provisions, we are not going to release the SALN, no matter how much criticism will I receive, even if I will be bashed, even if I will be removed from office,” he said in the budget panel hearing.

Mr. Duterte has not released his SALN to the public since 2018.

Presidential spokesperson Harry Roque has repeatedly said that it was up to the Ombudsman to release the President’s SALN.

But Martires still refused requests from journalists and lawyers for copies of the document.

He insisted that RA 6713 disallows even journalists from commenting on SALNs.

“This is what media does not know,” he said.

But Section 8 of the said law stated that “the public has the right to know” the SALNs of public officials and employees, including their financial and business interests.

Section 8 (C) (4) of the same law on the disclosure of SALN states that “[a]ny statement filed under this Act shall be available to the public for a period of ten (10) years after receipt of the statement.”

Zarate, a deputy minority leader, questioned the Ombudsman’s proposal, which received no support from about a dozen House members who attended the budget hearing.

“Isn’t it dangerous to penalize our people if they ask questions because freedom of expression is guaranteed by the Constitution and also the principle of transparency and accountability?” he said.

In a statement, Gabriela Rep. Arlene Brosas blasted Martires’ move to “criminalize commentaries” on the SALNs of public officials.

“Any attempt to clip free discourse on the wealth of public officials is a direct attack on free speech, and a move to shield sitting officers from public scrutiny,” she said.

“The Ombudsman should stop pandering to the narrow interest of top officials to preserve their reputation,” Brosas said. “It should act in line with its constitutional mandate to uphold transparency and efficient use of public funds.”

But Martires insisted that while SALNs could be published, “no person should be allowed to comment on the SALN of a particular government official or employee.”

He recalled that he was a “victim” of “unfair” reporting on his SALN in 2018.

It was reported that his wealth grew by P15.3 million in his first five months in office as Ombudsman. He did not reply to the Inquirer’s request then to explain the changes in his SALN. He later told reporters that the money largely came from retirement and other benefits from the Supreme Court.

Martires told the lawmakers he would stand by his September 2020 circular even if this would cost him his job.

He said that while he was not going to release the President’s SALN, he assured the public that Mr. Duterte has been submitting his SALN to the Ombudsman until 2020.

“I am willing to be removed from office to defend the memorandum circular I issued,” he said.

“I really do not know what is the purpose of these people asking for the SALN of the President, specifically, and the Vice President. What is in those offices? Is it only the President and Vice President who’s capable of corruption? Isn’t corruption starting in the grassroots, from the ranks of the clerks?” he said.

Over the years, however, high officials were among those found and prosecuted for corruption, including in one of the biggest such cases in the country—the P10-billion pork barrel scam—while Martires was still serving as a justice in the Sandiganbayan.

The biggest ill-gotten wealth cases—the hidden wealth of the Marcos family—involved the highest official in the land.

The Presidential Commission on Good Government reported in 2017 that it recovered at least P171.359 billion worth of the Marcoses’ ill-gotten wealth following trials in the Sandiganbayan.

Martires, who once authored a Sandiganbayan ruling dismissing graft charges against Mr. Duterte and five other Davao City officials, is the President’s fraternity brother at the College of Law of the San Beda University and his first appointee to the Supreme Court.

Martires took office as associate justice in March 2017 but stepped down about half a year before reaching retirement age in July 2018, and was appointed to succeed Morales as Ombudsman. —WITH A REPORT FROM PATRICIA DENISE M. CHIU