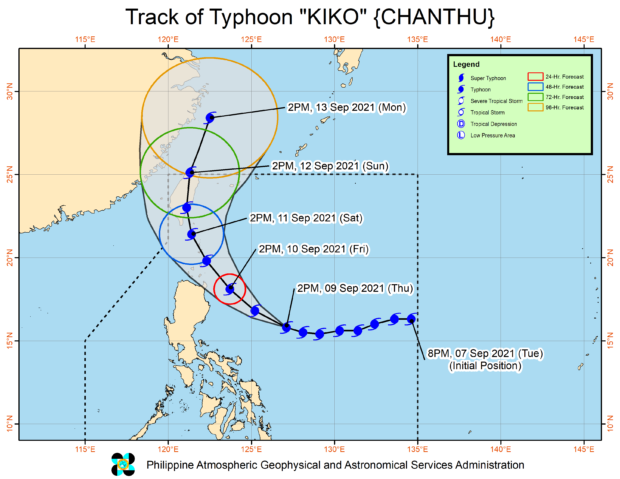 This developed as Tropical Storm Jolina moves further away and may possibly exit the Philippine Area of Responsibility (PAR) by Thursday night, according to the Philippine Atmospheric, Geophysical and Astronomical Services Administration (Pagasa).

Kiko was last spotted 550 kilometers east of Baler, Aurora, packing maximum sustained winds of 195 kilometers per hour (kph) near the center and gusts of up to 240 kph, Pagasa said.  It is heading west-northwest at 20 kph.

The state weather bureau also noted that the typhoon’s wind extends up to 200 km from its center or its eye.

Although the effects of Kiko would not be immediately felt, Pagasa hoisted Tropical Cyclone Wind Signal No.1 over the following areas:

It explained that raising the signal was meant to alert local governments and residents on the typhoon’s path to carry out necessary preparations.

Perez then warned that Kiko’s landfall may possibly be in the northeastern part of Cagayan on Friday.

(That is why we are advising not only Cagayan, not only the end-North Luzon. The Isabela area should also prepare for the possible approach of typhoon Kiko.)

Starting Friday afternoon or within the next 36 hours, heavy to intense with at times torrential rains may be experienced over Cagayan including Babuyan Islands, Batanes, and northern Isabela due to the typhoon, Pagasa said.

The rest of Isabela, on the other hand, will experience moderate to heavy with at times intense rains because of Kiko, it added.

By Sunday, the state weather service said, Kiko may exit the Philippine Area of Responsibility. 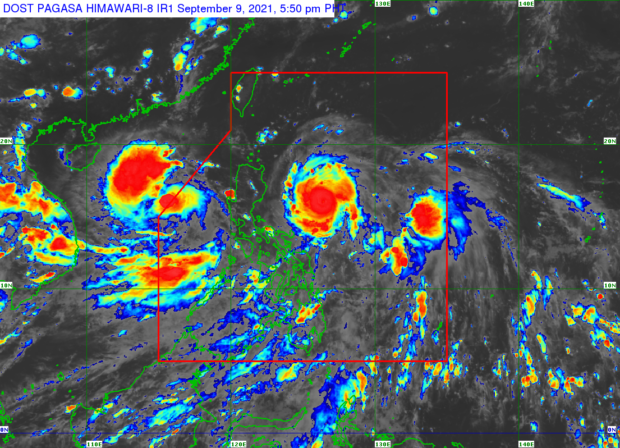 As for Jolina, Pagasa said the tropical storm was last spotted 410 km West of Dagupan City, Pangasinan, packing maximum sustained winds of 85 kph and gustiness of up to 105 kph. Pagasa also said that Jolina has been enhancing the prevailing southwest monsoon in the western portion of Luzon, Visayas, and Mindanao.

(Although it continues to move out of the country, and possibly out of PAR tonight, it continues to intensify the southwest monsoon here in the western part of Southern Luzon, Visayas, and Mindanao.)

(Jolina is anticipated to finally exit through the northwestern boundary of PAR this late Thursday afternoon or late Thursday night.)