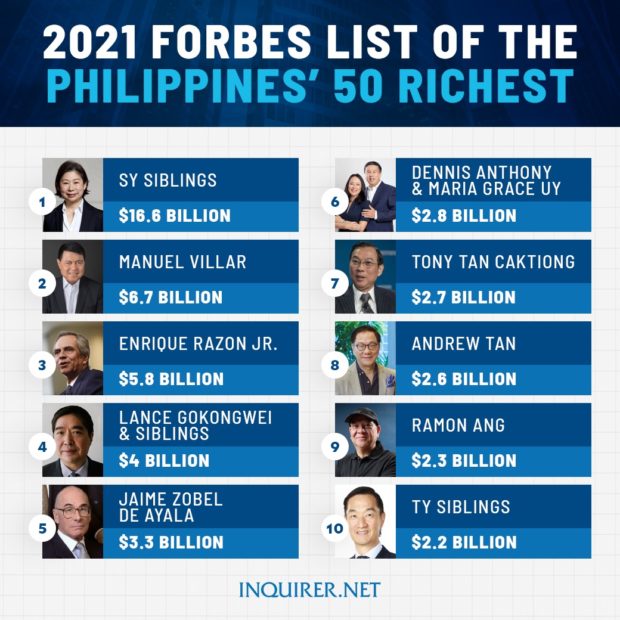 MANILA, Philippines — The COVID-19 pandemic has not stopped ravaging almost every known sector in the Philippine economy, but the Filipino tycoons just won’t stop getting richer.

According to the 2021 Forbes list of the Philippines’ 50 richest, the heirs of the late SM Supermalls founder Henry Sy Sr. continue to be the richest individuals in the country, with a collective net worth of $16.6 billion.

This marks their 14th year of being the richest tycoons in the country. Their fortune rose by $2.7 billion in the past year, despite the ongoing pandemic that put the whole Philippines under the longest quarantine and lockdown in the whole world.

Getting wealthier, however, is true for most billionaires in the list, according to Forbes, as a “robust recovery saw their collective wealth rise 30 percent to $79 billion.”

The top three in the list collectively got richer by almost $6 billion compared to last year’s net worth.

Number two in the list, property tycoon Manuel Villar, held on to his rank as the country’s second richest. His net worth rose by $1.7 billion from $5 billion in 2020 to $6.7 billion this year.

Port and casino operator Enrique Razon Jr. also remains in third place, with a net worth of $5.8 billion, a $1.5 billion increase from his previous net worth in 2020.

The list also included newcomers Dennis Anthony and Maria Grace Uy at the sixth spot, with a net worth of $2.8 billion. The two are co-founders of Converge ICT Solutions, a broadband services company.

Other newcomers in the top 50 include Luis Yu Jr., No. 32, $445 million; and Mariano Martinez Jr., No. 49, $205 million; owners of 8990 Holdings, a builder of low-cost homes, as well as husband and wife Benedicto and Teresita Yujuico, No. 48, $210 million, who reaped riches from the listing of DDMP REIT, an office landlord they co-own with fellow listee Edgar Sia II.

Meanwhile, Forbes also reported that more than a dozen tycoons saw their fortunes decline including liquor and airline billionaire Lucio Tan, who fell five spots from Top 7 last year to the 12th spot this year with a net worth of $1.9 billion.

According to Forbes, the minimum net worth to make the list this year was $200 million, up from $100 million last year.

Forbes compiled the list using shareholding and financial information obtained from the families and individuals, stock exchanges, analysts, and other sources.

This list, unlike the billionaire rankings, includes family fortunes, including those shared among extended families.