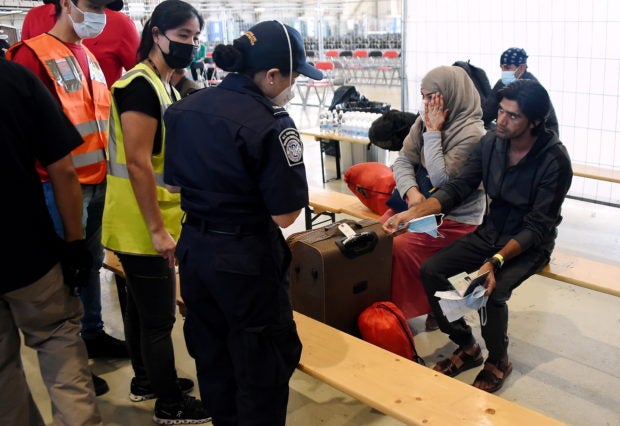 Afghan refugees are being processed inside Hangar 5 at Ramstein Air Base, where the U.S Secretary of State Antony Blinken will hold a virtual 20-nation ministerial meeting on the crisis alongside his German counterpart in Germany, September 8, 2021. Olivier Douliery / Pool via REUTERS

WASHINGTON — U.S. President Joe Biden has picked veteran diplomat Lee Wolosky to help coordinate the resettlement of refugees from the war in Afghanistan, an administration official said on Wednesday.

Wolosky will serve in the White House Counsel’s Office and will work with officials with the National Security Council and other top administration aides to provide legal expertise on resettlement issues, the official said, speaking on condition of anonymity.

The United States has evacuated tens of thousands of Afghans from their home country during Biden’s withdrawal from that country after 20 years of war, a hasty pullout that has drawn sharp criticism.

Wolosky previously served as U.S. special envoy for then-President Barack Obama in his efforts to close the U.S. military prison facility at Guantanamo Bay, Cuba. He was in the position from July 2015 to January 2017.

During his tenure, Wolosky negotiated with a range of countries to repatriate or accept the resettlement of dozens of inmates as the administration sought unsuccessfully to empty the facility before Obama’s successor, Donald Trump, took office.

Wolosky helped Obama whittle down the inmate population there to only 41 by the end of his term but still short of the Democratic president’s promise to close the jail dating back to his 2008 presidential campaign. Thirty-nine prisoners are currently held at Guantanamo.

Wolosky served as director of transnational threats on the National Security Council for both Bill Clinton and George W. Bush during their presidencies.

Wolosky was also the attorney for Fiona Hill, a Russia specialist who served on the National Security Council for Trump, when she provided testimony in the impeachment inquiry that looked into whether Trump asked Ukraine to investigate Biden in return for a White House meeting or the release of U.S. security aid.

Read Next
Chinese businessman gets 2 years in prison for exporting US marine tech to China
EDITORS' PICK
Disease expert: Omicron variant may behave like Delta
Palace: Malls, establishments may require customers to use of face shields
This new condo in the South will make you want to turn a new leaf
Smart offers wireless fiber-like speeds to Filipino homes with country’s first 5G Prepaid Home WiFi
Syringes for Pfizer vaccine arriving on December 2 — NVOC chairperson
Legarda: Ending Violence Against Women, a cause for all
MOST READ
Bongbong Marcos to face another disqualification case
Christine Bersola, Julius Babao cleared of cancer after colonoscopy, endoscopy
Former PM Abe says Japan, US could not stand by if China attacked Taiwan
Tropical storm intensifies as it approaches PAR
Don't miss out on the latest news and information.