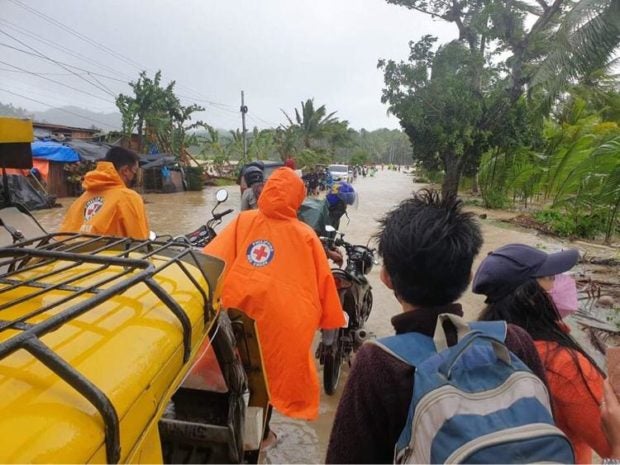 Local social workers and health authorities were attending to the evacuees to ensure that health and safety protocols are being followed to prevent the spread of COVID-19, Avenilla said.

In Marinduque, 1,839 people (574 families) were evacuated, according to a report from the Mimaropa (Mindoro, Marinduque, Romblon, and Palawan) regional police. At least 11 families or 40 individuals were also evacuated in Romblon, it said.

In Bicol, a 28-year-old man drowned in a swollen river in Placer town, Masbate province on Wednesday morning.

On Tuesday morning, six fishermen were rescued after their boat capsized in the waters off Barangay Matayum of Cataingan town, also in Masbate.

“Jolina” made landfall in Dimasalang, Masbate, on Tuesday morning. It made a second landfall in Marinduque early Wednesday after crossing the southern portion of Quezon on Tuesday.

Online and modular classes in public and private schools and work in government offices in Quezon and Oriental and Occidental Mindoro were suspended Wednesday due to the storm.

In Bicol, 5,144 families (18,197 people) were evacuated in the provinces of Masbate, Albay, Sorsogon and Camarines Norte, the Office of Civil Defense (OCD) in the region said on Wednesday.

Gremil Alexis Naz, the OCD Bicol spokesperson, said as of Wednesday noon, only 1,474 families, or 6,793 people, most of them in Masbate, were still in evacuation centers.

At least 271 houses in Masbate were damaged while initial losses from damaged or destroyed fishing boats, equipment, and fish ponds were pegged at P13.7 million, reports from the Masbate PDRRMC showed.

Sea trips in the ports of Matnog, Bulan, Castilla, and Pilar in Sorsogon province resumed on Wednesday morning.

In Bulacan province, Ipo Dam in Norzagaray town discharged excess water on Wednesday morning as its elevation breached the spilling mark of 101 meters above sea level due to heavy rainfall.

At 7:30 a.m, the dam’s level was at 101.23 masl and initially released 55 cubic meters of water, according to the government weather bureau.

Residents living in low-lying areas of the towns of Angat, San Rafael, Bustos, Baliuag, Pulilan, Plaridel, and Hagonoy were cautioned against possible floods and flash floods due to the water discharge.

Ipo Dam catches the runoff water from Angat Dam, the main source of water in Metro Manila. Angat’s level as of Wednesday was at 194.70 masl, which was below its spilling level of 212 masl.

At least seven villages in the City of Malolos and the towns of Marilao and Guiguinto were already flooded due to heavy rain.

Storm Signal No. 2 was raised in the provinces of Zambales, Pampanga, Bataan and Tarlac as “Jolina” moved west-northwestward with winds of 100 kilometers per hour and gustiness of 125 kph. These areas were expected to experience heavy rain.