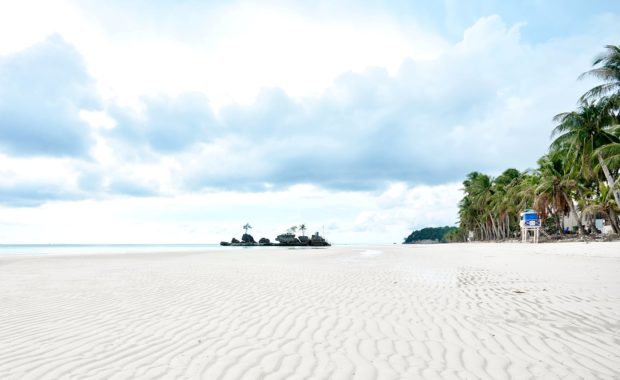 ILOILO CITY, Iloilo, Philippines — After more than five weeks, Boracay Island has reopened its doors to tourists again after quarantine restrictions were relaxed.

In an advisory, the Aklan provincial government announced that tourists would be allowed to visit the island starting Sept. 8.

The quarantine qualification of Aklan has been downgraded to general community quarantine (GQC) from Sept. 8 to Sept. 30. GCQ allows the operation of outdoor tourist attractions.

The province has been under modified enhanced community quarantine (MECQ) since Aug. 1.

Boracay has been closed to tourists, except those who remained on the island and working remotely.

The provincial government, in its advisory, said entry requirements to the province and the island remain.

Tourists bound for Boracay Island are required to submit a negative COVID-19 swab test results taken within 72 hours before their arrival. They also must have a confirmed hotel reservation.

Business establishments in Boracay are allowed to operate up to 10 p.m., longer than the 7 p.m. maximum on the mainland, according to an executive order issued on Sept. 7 by Gov. Florencio Miraflores.

But tourists are expected to come only when the MECQ status of Metro Manila is downgraded on Sept. 15 and when flights between Manila and Barangay Caticlan in Malay town resume.

Tourist arrivals in July reached 35,108, the highest during the pandemic, with 22,617 coming from Metro Manila.

Two business groups on the island—the Philippine Chamber of Commerce and Industry-Boracay and Boracay Foundation Inc.—earlier asked Miraflores to authorize the municipal government of Malay to issue a separate executive order on the island’s community quarantine status, guidelines and restrictions.

They pointed out that the situation on the island was different from the Aklan mainland.

The prolonged lockdown, the third during the pandemic, has forced many shops on the island to close down. Owners of businesses that have remained open said they were struggling to maintain their staff due to the lack of tourists.

Boracay Island was closed to tourists in March last year as the COVID-19 pandemic spread.

Tourists from Western Visayas were allowed on the island on June 16 and from the rest of the country on Oct. 1 last year.