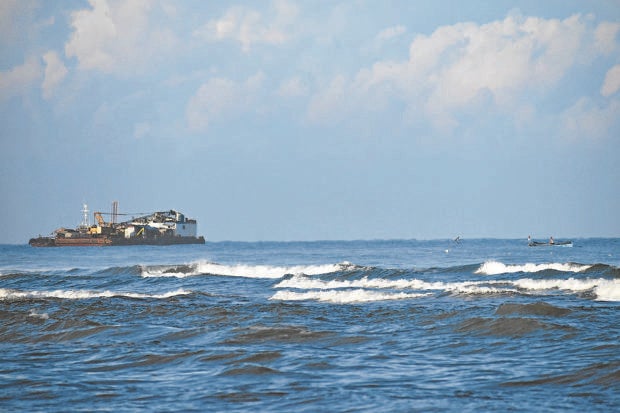 INSPECTION SOUGHT Fishermen and residents in coastal villages in Zambales are asking authorities to make sure that barges and other foreign vessels seen in local waters are not engaged in illegal activities. —CONTRIBUTED PHOTO

SAN ANTONIO, Zambales, Philippines — Local fishermen said they had been seeing foreign vessels in the province’s waters since March and these could be linked to the discovery and seizure of a large volume of “shabu” (crystal meth) in Candelaria town following a government raid on Tuesday.

Citing their three-month surveillance, Villanueva said a large vessel and a local speedboat were used to transfer the P3.4 billion worth of illegal drugs offshore to the rest house in Barangay Libertador owned by the four Chinese drug suspects slain during the operation.

Killed in the operation were Youhua Xu, 50; Gao Manzhu, 49; Hong Jianshe, 58; and Eddie Tan, 60. Villanueva described Xu as the “biggest drug personality” in the country and a member of a “transnational drug trafficking organization.” Resort workers and fishermen in Candelaria and other towns said they saw at least three barges near the province’s shoreline since March.

“These vessels would move from one location to another. In some instances, boxes were seen unloaded and transferred to a tugboat,” a fisherman told the Inquirer on Wednesday. He asked that his name be withheld for security reasons.

The vessels, he said, disappeared after the Candelaria raid.

Fisherman Ricardo Reyes, president of environmental group Save Zambales Kalikasan Movement, said they had reported the sightings of the unidentified vessels to the Philippine Coast Guard (PCG).

He said some of these were seen in the towns of San Narciso and San Felipe, some 69 kilometers from Candelaria.

But the PCG substation in San Felipe said some of these ships were dredging vessels that were issued permits by the Philippine Ports Authority to do soil sampling activity for government projects.

Police Col. Romano Cardiño, Zambales police director, said they would check if these vessels were engaged in illegal activities.

Hours after the antidrug operation in Candelaria, authorities seized 80 more kilos of shabu, worth P544 million, from three other Chinese inside the Subic Bay Freeport.

The illegal drugs were intercepted at a checkpoint at the Tipo Gate of the free port. Villanueva said the operation was related to the Candelaria raid.

According to the police, the illegal drugs came from the same rest house in Candelaria and would be distributed to different areas in Luzon. —JOANNA ROSE AGLIBOT