Duterte not focusing much on COVID-19 response, says VP Robredo 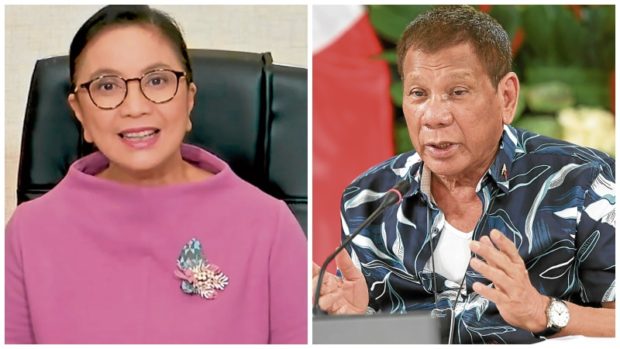 MANILA, Philippines — Vice President Leni Robredo on Monday said President Rodrigo Duterte’s focus appears to veer towards politics over the ongoing surge in COVID-19 cases after he dedicated his recent public addresses to criticizing senators and even the Commission on Audit (COA).

“Nakikita natin yun (We can see that),”  Robredo said in an interview with ABS-CBN News Channel when asked if she thinks the President is focusing more on politics rather than  the country’s COVID-19 situation.

(In fact, the last two press conferences were really frustrating for us because we are in the middle of a surge which requires all hands on deck, the urgency is most important now but the greater part of the press conference saw him criticizing senators, the COA. What comes out of his mouth gives us a sense of what his priorities are.)

Robredo said she also noticed that the President does not seem to know the details of the COVID-19 response.

(From the start in March last year, I religiously watched the Monday evening press conferences. I stopped several months ago so I just read the transcript.)

(When I listen and read the transcript, I have a sense that he does not know the details. I think there’s a lack of focus on the details.)

While she recognized the response of government agencies to address the pandemic, Robredo said “weaving” of their efforts remains lacking.

Duterte had stressed that the Philippines doesn’t have that many deaths despite logging a high number of COVID-19 cases.

Robredo earlier said she is interested in helping the administration address the COVID-19 situation.