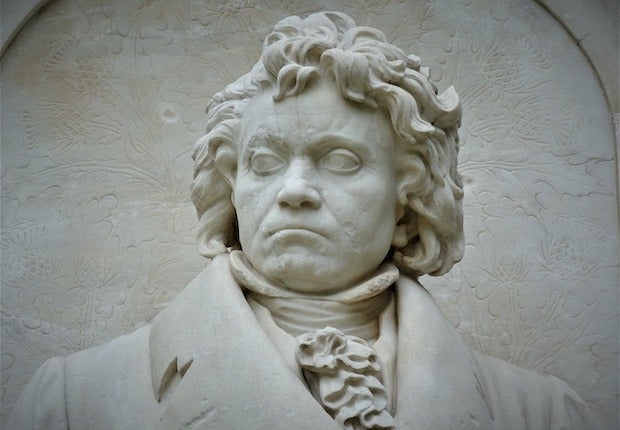 The Beethoven statue at the monument dedicated to German composers at the Tiergarten at Berlin. (Stock photo from Pixabay)

LAUSANNE — As conductor Guillaume Berney marks the opening downbeat, the first chords ring out in a Lausanne concert hall of what could conceivably be an extract of Beethoven’s 10th symphony — if the great German composer had ever managed to complete the piece.

The classical music world has often speculated what Ludwig van Beethoven (1770-1827) would have gone on to write after his monumental ninth symphony.

And a number of musicologists and composers have already ventured to orchestrate and complete some of the scraps of notation they believe were his first sketches for his next symphonic masterpiece.

But to mark their 10th anniversary season this year, Berney and the Nexus orchestra have decided to use artificial intelligence to create a four-minute extract which they have dubbed “BeethovANN Symphony 10.1.”

“That is not a typo,” Berney told the audience on the first night, with a second performance scheduled in Geneva on Friday.

Berney explains that the ANN refers to the artificial neural network that created it, basically without human intervention.

The final score was only generated and printed out hours before the performance after computer program designer Florian Colombo oversaw the final step in what for him has been a yearslong process.

Colombo made a couple of small changes before clicking a button to generate the score.

“It’s like watching a birth,” Berney said as he picked up the first pages emerging from the printer.

The excitement was palpable as the freshly created sheet music was presented to the orchestra.

The musicians eagerly began rehearsing for the evening concert, many smiling with surprise as the harmonies unfolded.

“There is a touch of Beethoven there, but really, it is BeethovANN. Something new to discover,” said Colombo, himself a cellist, as the sound filled the hall.

“It works,” he said. “There are some very good parts, and a few that are a bit out of character, but it’s nice,” the conductor said, acknowledging though that “maybe it lacks that spark of genius.”

Colombo, a computer scientist at the EPFL (Swiss Federal Institute of Technology Lausanne) technical university, developed his algorithm using so-called deep-learning, a subset of artificial intelligence aimed at teaching computers to “think” via structures modeled on the human brain, or ANNs.

To generate something that might possibly pass as an extract from Beethoven’s 10th, Colombo first fed the computer all of the master’s 16 string quartets, explaining that the chamber works provided a very clear sense of his harmonic and melodic structures.

He then asked it to create a piece around one of the theme fragments found in Beethoven’s sparse notes that musicologists believe could have been for a new symphony.