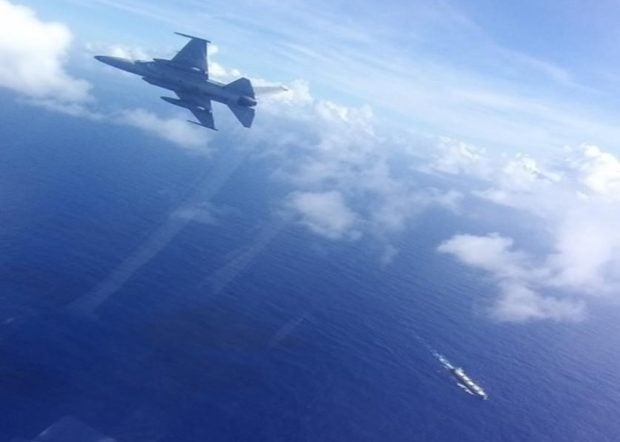 CHALLENGE: The Philippine Air Force scrambles on Thursday two FA-50 fighters (an example shown in this file photo) to intercept an “unknown” aircraft that entered the country’s airspace off Pangasinan province without authority. —PHOTO COURTESY OF PAF-PAO

Mariano said the aircraft was at 21,000 feet (6.4 km) heading northeast at 265 knots (490 km per hour) and the Air Force’s air defense control center said it was following an “unknown track of interest.”

“It was challenged through radio calls and other electronic means. The decision was made to intercept it after no response came from the said aircraft,” he told reporters.

The PAF dispatched two FA-50 jets at 9:36 a.m. to intercept the aircraft for visual identification, but about four minutes after the FA-50 took off, the aircraft changed direction toward the north and increased its speed to 400 knots (740 kph).

The intercept was terminated after nine minutes at 9:45 a.m., he said.

But even after Mariano declined to speculate, Filipino netizens soon began speculating on social media with MaxDefense Philippines, a local blog popular among Filipino military aficionados, quickly concluding “there is a huge chance that [the plane was] from China.”

MaxDefense Philippines, which is also affiliated with the website Philippine Defense Resource, is supposedly maintained by one Max Montero, who claimed on Twitter that he is based in Australia.

MaxDefense speculated that China may be testing a strategy where it would send fighter jets to fly by countries with whom it has territorial disputes.

But the PAF reported that the aircraft fled the interceptors at 400 knots, while private jets cruise at 450-550 knots and military fighters jets are known to top Mach 1, or 667 knots.