4 suspects nabbed, P37-M worth of meth seized in 2 drug stings in QC 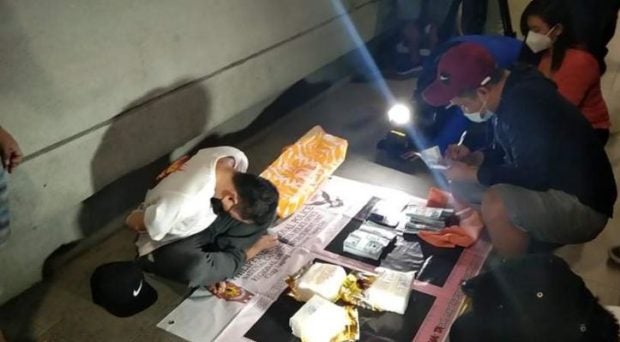 Jason John Alberca was arrested in a buy-bust operation in Barangay Santo Cristo, Quezon City. (Photo from the NCRPO)

In Barangay Santo Cristo, suspect Jason John Alberca, 43, was arrested on Friday evening and 3 kilograms of crystal meth worth P36.8 million were seized from him.

In this operation, an officer posing as a buyer managed to buy 1 kg of the drug for P1.5 million.

Two of his companions —  Juneross Guillermo De Leon, 38, and Micheal De Leon, 43 — escaped in a white Nissan Navarra. They went towards the direction of Balintawak.

In Barangay Masambong, three suspects — Marie Ann Tongco, 28, Allan Isaac Giducos, 25, and Alvin Pangilinan, 29 — were arrested on Saturday morning and 75 grams of crystal meth worth P510,000 were seized from them.

All suspects will face charges for violating the Comprehensive Dangerous Drugs Act of 2002.