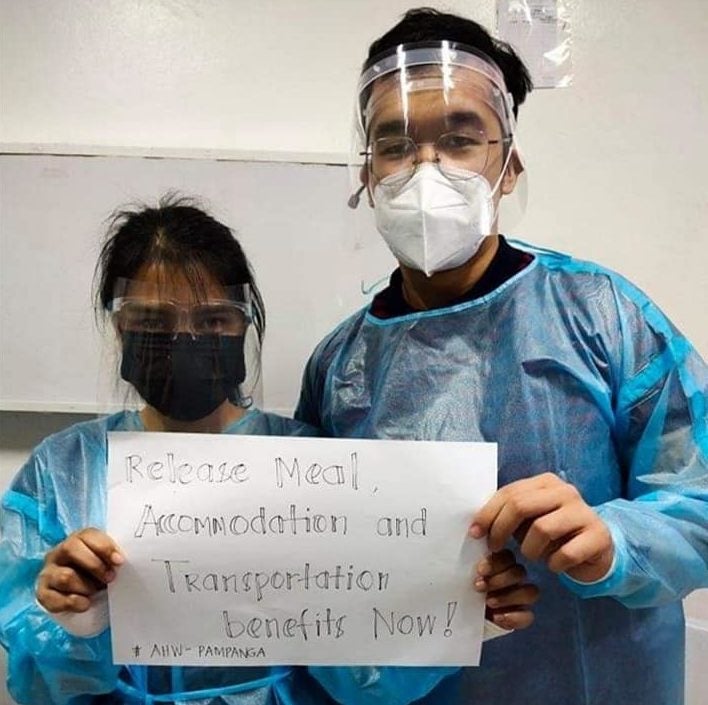 FROM THE WARD Health workers at the Jose B. Lingad Memorial General Hospital in Pampanga stage a “protest from the ward” as they joined the Alliance of Health Workers’ national day of protest on Wednesday demanding for the release of their benefits. —PHOTO COURTESY OF ALLIANCE OF HEALTH WORKERS

MABALACAT CITY—Health-care workers in the provinces have vowed to hold more protest actions if the national government fails to release the benefits that had been promised to them.

According to the 37,000-member-strong Alliance of Health Workers (AHW), its leaders in different parts of the country will meet soon to plan the protest actions to press the government to release the health workers’ benefits.

In a phone interview on Friday, AHW president Robert Mendoza told the Inquirer that they had been asking the government to release their active hazard duty pay, and meals, accommodation and transportation allowances.

“We will discuss our next moves, possibly more protest actions, to compel the national government to release the benefits. We also demand the resignation of DOH (Department of Health) Secretary [Francisco Duque III] who should be made liable for the various anomalies and failures of his agency,” he said.

Mendoza said health workers in Central Luzon who were mostly employed in government hospitals operated by the DOH and local governments had joined the AHW nationwide protest on Wednesday.

In Pampanga province, he said some 20 health workers at the Jose B. Lingad Memorial General Hospital staged a “protest from the ward” by having their photos taken while holding bond papers with their written demands.

Similar protests were also held in Bulacan and Isabela provinces by some 80 employees of DOH-run medical facilities and local government-run district hospitals.

“A year has passed, but the basic problem confronting health workers in relation to the COVID-19 issue remains. Enough is enough!” Mendoza said in an earlier statement on Tuesday.

He said their organization’s members in Metro Manila led the first protest on Wednesday, the deadline that President Duterte had given health and budget officials to release funds for the health-care workers’ special risk allowance (SRA) and other benefits.

Undersecretary Maria Rosario Vergeire told reporters on Tuesday that P311 million worth of SRA has already been downloaded to DOH regional offices that would benefit at least 20,208 health-care workers, but the DOH has yet to secure funds to pay the SRA of about 17,000 others.

According to Mendoza, their protest actions have the support of their members working in private hospitals in the country.

“Even some Filipino health workers abroad who are affiliated with AHW did the same protest from the ward. They, too, are very supportive of our cause. They know the risks and hardships being faced daily by health workers in our country, especially during the time of the pandemic,” he said.