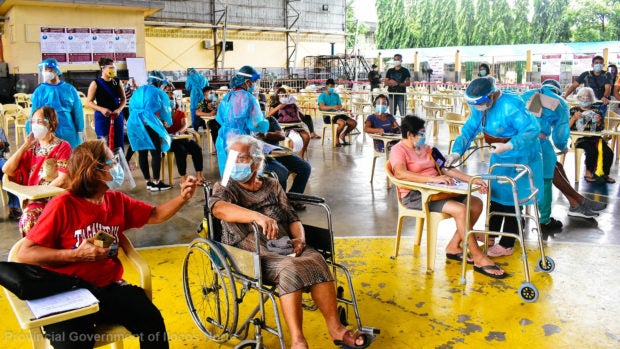 LAOAG CITY—The number of active COVID-19 cases in Ilocos Norte province had been waning in the past days as it dropped to 3,045 on Thursday (Sept. 2) after the “mass recovery” of 530 patients from the disease, data from the provincial government showed.

After experiencing a surge in COVID-19 cases fueled by the Delta variant, Gov. Matthew Marcos Manotoc said that it was a “good sign” that the number of new COVID-19 cases recorded in the past two weeks had gone down compared to the number recoveries.

In a television interview on Thursday, Manotoc said at least 32 cases of the highly contagious Delta variant were traced to 13 of the 23 towns and cities in the province so far.

Before the outbreak began in May, the province was only recording an average of 22 cases in a week.

This steadily rose in the following months until it peaked at 273.7 in the second week of August, data from the provincial government showed.

In the latest report of the Department of Health (DOH) in the Ilocos region, cases had decreased by 19.7 percent from Aug. 22 to 28 compared to the previous week.

“The way the cases were rising and the spread of the virus [in the towns and cities] in the previous months was really different,” said Manotoc.

He added that they were expecting that COVID-19 cases will “normalize in due time.”

The governor said the number of infections started to go down when the provincial health task force disallowed home isolation for COVID-19 patients.

Meanwhile, Manotoc said the rollout of the vaccine supply in the province is “slow but steady,” which prompted him to appeal to the national government for more supplies.

“There is progress in [the vaccination rollout] but very [still] far from [achieving] herd immunity,” he said, adding that over 75,000 of the 609,588 population of the province were fully vaccinated against COVID-19.