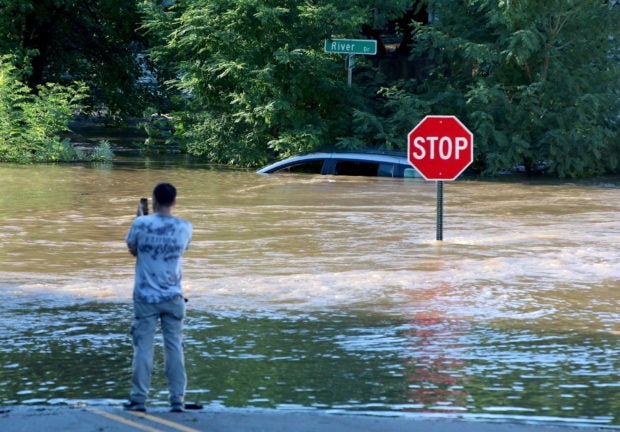 A man takes photos of a submerged car as the remnants of Hurricane Ida brought torrential rains and flooding to the area in Passaic, New Jersey, September 2.  Thomas P. Costello/USA TODAY Network via REUTERS

NEW YORK — New Yorkers are a stoic lot – and no strangers to extreme weather. But even they were taken off guard by the sheer volume of rain that fell in a few short hours on Wednesday evening and the chaos it provoked.

Social media was abuzz with videos showing cars nearly submerged on major roadways and waterfalls gushing into subway stations as New York scrambled to respond to the unexpected ferocity of Ida, a storm that had already clobbered Louisiana when it made landfall as a Category 4 hurricane on Sunday.

College student Daniel Winchester, 18, said he waded through water for more than four hours on Wednesday night, helping people escape from about 100 cars that got stranded on the street near his apartment in the Elmhurst neighborhood of Queens. The water was so deep in some places that cars simply floated away, he said.

Other New Yorkers were forced to evacuate their homes.

“When the water started coming up through the drains, it was like a bad nightmare,” said Rebecca Timman, 29, a real estate agent whose basement apartment in the Bedford-Stuyvesant neighborhood of Brooklyn flooded.

Timman rushed to bring her belongings up to the first floor of the building as two inches of water collected in her basement bedroom. Like other New Yorkers, she had been receiving flash flood warnings on her phone since Tuesday, but was still taken by surprise by the sheer amount of water.

Ida’s remnants brought 6 to 8 inches (15 to 20 cm) of rain to a swath of the Northeast, from Philadelphia to Connecticut, and set an hourly rainfall record of 3.15 inches for Manhattan – breaking the record set by Tropical Storm Henri less than two weeks ago, the National Weather Service said.

New York police were dispatched to at least six homes in Brooklyn and Queens on Wednesday and Thursday where residents were found dead or near death as a result of the floods, according to the New York Police Department public information office.

Outside a house where officers discovered a 45-year-old woman and 22-year-old man who died after their home flooded, New York officials held a press conference on Thursday where they emphasized the scientific consensus that human-caused climate change is increasing the frequency and impact of natural disasters such as Ida.

U.S. Representative Gregory Meeks said he was devastated by the loss of his two constituents. “A mother, a son, gone from us, because of climate change and these record storms,” Meeks said.

“The suddenness, the brutality of storms now, it is different,” said New York City Mayor Bill de Blasio at the same news conference, adding that the storm was “the biggest wake-up call” that the United States needs to do more to fight climate change.

For 55-year-old Dave Sarni, a resident of the Park Slope neighborhood of Brooklyn, the storm also highlighted an urgent need for improvements to New York City’s sewer lines and other infrastructure. “That’s gotta be addressed,” he said.

New York officials blamed much of the flooding that stranded subway trains and cars throughout the city on the unexpected record-setting intensity of the rainfall that occurred in a short space of time, rather than the total for the day, which was within predictions.

“This is the first time we’ve had a flash flood event of this proportion in the city of New York and in the outlying areas,” said New York state Governor Kathy Hochul.

In Scarsdale, a suburb north of the city, residents began the process of cleaning up after seeing their cars submerged and their garages filled with water less than an hour after the rains began.

“We’re lucky we’re not in New Orleans,” said Jason Gold, 49, of Astoria in Queens, who was visiting a family member in Scarsdale.

“We take for granted that it won’t happen in this part of the country.”