Evacuated Afghans, hoping to resettle in US, face extended limbo in third countries 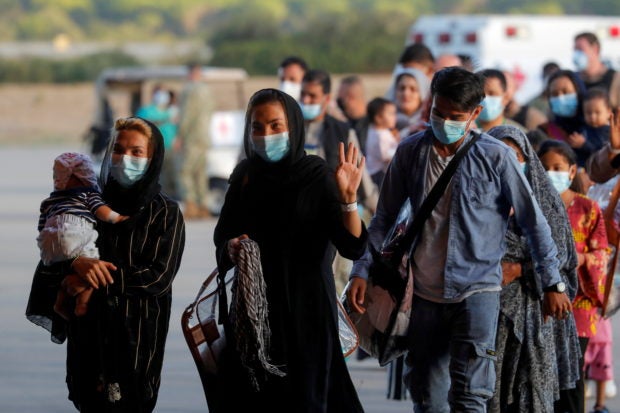 In mid-August, Ahmad got an urgent call from his nephew, Zia, telling him to come immediately to Kabul airport to try to get on an evacuation flight.

Members of the Taliban had been to Ahmad’s house in the capital looking for Zia, who had worked with the U.S. military in Afghanistan. They also wanted Ahmad, who was not at home at the time, to report to the police station, Zia told him.

Ahmad, 43, worried he would be arrested or executed because of his nephew’s involvement with the U.S. military, which flew out its last remaining troops this week in a chaotic withdrawal, formally ending a 20-year war.

Ahmad went to the airport with his wife and six children but got separated from them in the crowds at the entrance gates, he said. He showed officials a photo of his nephew’s green card on his phone and told them he was a member of his family. That was enough to get him – alone – on a plane to the U.S.-allied Gulf Arab state of Qatar, he said.

Following the scramble to evacuate vulnerable Afghans, thousands of people, some with no documentation or pending U.S. visa applications, others in families with mixed immigration statuses, are now waiting in “transit hubs” in third countries. The hubs include U.S. military bases in Qatar, Germany and Italy where Afghans must overcome bureaucratic immigration hurdles to eventually enter the United States.

“I am so disturbed about leaving them,” Ahmad said by phone, speaking through an interpreter about his wife, five daughters and 2-year-old son, who are now in hiding.

Ahmad spoke on condition he be identified only by his first name to protect his family.

Army General Mark Milley, chairman of the Joint Chiefs of Staff, said on Wednesday there were about 43,000 evacuees in nine countries in Europe and the Middle East, and some 20,000 Afghans at eight military bases in the United States.

At the U.S. military base in Qatar, people line up for hours for food, fearful that there won’t be enough to go around, said Ahmad. He has only the clothes he arrived in, which quickly became sweat-drenched in the 100-degree Fahrenheit (38-degree Celsius) heat.

His nephew, Zia, is a U.S. permanent resident so was able to fly to Seattle, Washington, with his wife and five children – three of whom had pending visa applications but no visas – after two weeks in Qatar. Ahmad and another nephew, who have only Afghan identity documents, remain.

U.S. officials took their fingerprints on Tuesday but have given them no updates on when they might board a flight to the United States. They don’t have pending Special Immigrant Visa applications, Ahmad said.

Some evacuees without visas have been allowed into the United States temporarily on urgent humanitarian grounds, rather than under the traditional refugee program.

SIVs are available to certain Afghans who aided U.S. forces as interpreters and translators, as well as in other roles, and who fear reprisals by the Taliban.

A White House official said the U.S. government is “surging resources” to bases abroad to screen those hoping to enter the United States.

Much is still unclear to refugee groups, immigration lawyers and individual Afghans about how long some people may have to wait overseas as checks on their applications move forward.

The immigration bureaucracy is “cumbersome and there is a lot of complexity to it,” said Steve Miska, a former White House official who is helping coordinate evacuation efforts by non-profit and veterans groups.

Advocates have long criticized the slow-moving, multi-step SIV application process, which has left many petitions languishing without resolution for years. Refugee groups said the delays are unjustified because SIV applicants have extensive documentation of their work with U.S. entities and pose no national security threat.

For Afghans like Ahmad who have no pending visa applications, the groups said the U.S. government could draw on its experience vetting refugees and asylum seekers who often cross borders without documents, to allow their passage to the United States.

Many of these Afghans had their fingerprints and photos collected over the years, either by U.S. government officials or Afghan authorities who shared information with the United States.

“The U.S. can figure out who people are, but this takes time and resources and whether the U.S. government is going to bother to help people or force the people themselves to meet an impossible burden,” said Margaret Stock, a military and immigration expert.

In addition to the Afghans at U.S. military installations abroad, there are thousands of Afghans who were evacuated in a flurry of improvised private efforts organized by non-profit groups, companies and veterans’ associations.

“That’s an entire category of refugees I am not sure our government has visibility on,” Miska said. “Those are the ones I am really nervous about,” since they might struggle to lodge petitions to enter the United States.

Around 3,500 Afghans were brought to the United Arab Emirates on charter flights by a U.S. nonprofit, according to a diplomat familiar with the situation.

These Afghans are not being processed to go to the United States, the diplomat said, as Washington is prioritizing the roughly 4,000 people in the UAE evacuated on U.S. government flights. The diplomat said it is expected to take months to process all these evacuees.

The groups that leveraged personal connections and raised private donations to charter flights out of Afghanistan may lack the expertise to help people navigate the complex U.S. immigration system, said Miska, the former White House official.

Many Afghans now find themselves in unfamiliar countries with no clear idea of where they will be able to permanently settle.

She said the organization was trying to help their staff as they consider whether to apply for visas or resettlement in the United States or elsewhere.

Albanian officials have welcomed the evacuees – many of whom only had national identity cards and no passports – and put them up in a local beach resort.

Some who made it on to evacuation flights are haunted by the idea they could have brought along more relatives.

“I feel so guilty,” said Zia’s wife, Tahera, now in Seattle. “What if I could have gotten them out?”