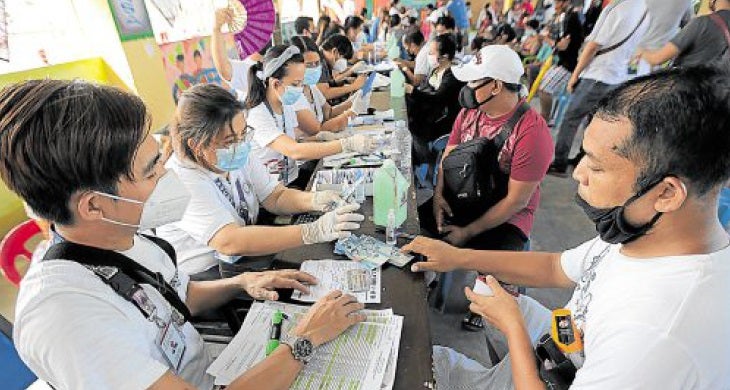 Despite a six-day extension which ended on Aug. 31, only six out of the 17 local governments in the National Capital Region (NCR) were able to distribute 100 percent of the financial assistance allocated for residents affected by the two-week hard lockdown imposed last month.

Overall, all 17 local governments in the capital region managed to distribute around 95 percent of the P11.2-billion cash assistance to a total of 10,663,537 beneficiaries by the end of August.

Año said that local governments with unclaimed funds may continue processing pending claims until Sept. 10, the last day before the undistributed money must be returned to the national treasury.

The P11.2-billion cash assistance from the national government was for low-income residents affected by the implementation of the enhanced community quarantine in the NCR from Aug. 6 to Aug. 20.

Qualified beneficiaries were entitled to P1,000 each for a maximum of four recipients per family.

The Metro Manila local governments had 15 days, or until Aug. 25, to finish distributing the money but they asked for an extension given their limited manpower and the challenges posed by the surge in COVID-19 cases in the capital region.

Meanwhile, a lawmaker has called on the Department of Social Welfare and Development (DSWD) to ask for transaction reports from six financial service providers (FSP) tapped by the government for the distribution of the cash assistance funds. In a House hearing on the DSWD’s 2022 budget on Wednesday, Gabriela Rep. Arlene Brosas said the digital payout platforms were making money from beneficiaries by charging them fees ranging from P50 to P100.

But the DSWD clarified that based on the memorandum of agreement it signed with the FSPs, the maximum allowable fee per transaction was P50.

Social Welfare Secretary Rolando Bautista promised to provide the lawmaker with a copy of the agreement signed by the DSWD with the six FSPs.

The DSWD has proposed a budget of over P191 billion for next year, 8.22-percent higher compared to this year.

The Pantawid Pamilyang Pilipino Program, the department’s flagship project for indigent Filipinos, will get the biggest share of the P115.669 billion for 4,400,000 household beneficiaries.

However, economic research group Ibon Foundation noted that the proposed 2022 budget of the Duterte administration doesn’t give the “ayuda (financial aid) that millions of Filipinos need to alleviate economic distress.”

In a recent statement, Ibon said the proposed budget revealed the “gross inattention to direct cash assistance for distressed families” during the health crisis, with the discontinuation of COVID-19-related emergency assistance programs.

It noted how the P226.9 billion worth of COVID-19-related emergency assistance programs in 2020, including the P206.7 billion cash aid funds, were absent in the 2022 budget. —WITH A REPORT FROM MARIEJO S. RAMOS