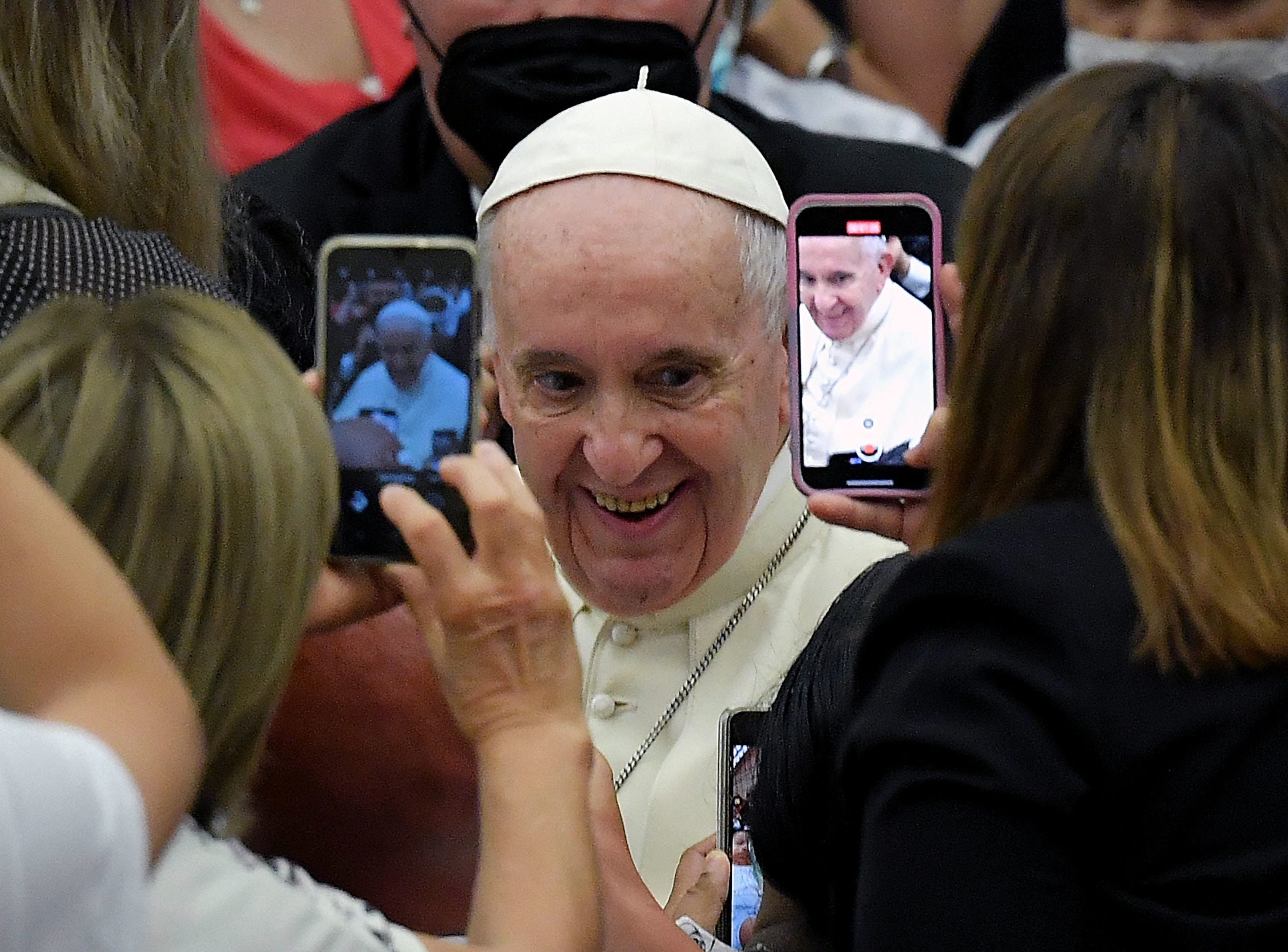 ‘I’MSTILL ALIVE’ Pope Francis leaves after his weekly general
audience in the Paul VI hall at the Vatican on Sept 1. —AFP

VATICAN CITY—Pope Francis has dismissed media reports that he might resign following his surgery earlier this year, saying in an interview broadcast Wednesday that it “didn’t even cross my mind”.

As if to prove his energy and commitment to the job, the 84-year-old announced further foreign trips, to Greece, Cyprus and Malta, and confirmed he hoped to attend the COP26 climate conference in November.

“I don’t know where they got it from last week that I was going to resign!” he told Spanish radio Cope in a wide-ranging interview, referring to media reports.

He said that “it didn’t even cross my mind” to follow the path of his predecessor, Benedict XVI, who in 2013 became the first pontiff to resign in 600 years.

“Whenever a pope is ill, there is always a breeze or a hurricane of conclave,” he added, referring to the meeting of cardinals called to elect a new pope.

Francis underwent an operation on July 4 after suffering from a type of diverticulitis, an inflammation of pockets that develop in the lining of the intestine.

Asked how he was feeling, the pope said, laughing: “I’m still alive.”

“Now I can eat everything, which was not possible before with the diverticula,” the pontiff said. “I still have the post-operative medications, because the brain has to register that it has 33 centimetres less intestine… But besides that, I have a normal life.”

The pope is due to visit Hungary and Slovakia on September 12-15, and the official program includes a meeting with Hungarian Prime Minister Viktor Orban.

He gave no dates for his planned visits to Greece, Cyprus and Malta, but said he was preparing for the climate talks in Glasgow.

“It all depends on how I feel at the time. But in fact, my speech is already being prepared, and the plan is to be there,” said Francis, who has been outspoken on the need to tackle global warming.

COP26 is the biggest climate summit since the 2015 Paris negotiation, which the pope said “was the summum (pinnacle) in becoming globally aware”.

“Then what happened? Fear set in,” he said. “And slowly, in the subsequent meetings, they went backwards. I hope that Glasgow will now raise its sights a bit and bring us more in line.”

China is not easy

In his interview with radio Cope, the pope also defended the Vatican’s controversial agreement with China that allows both parties a say in appointing Catholic bishops.

“China is not easy, but I am convinced that we should not give up dialogue,” he said.

China’s roughly 12 million Catholics have for decades been split between a government-run association, whose clergy were chosen by the atheist Communist Party, and an unofficial underground church loyal to the Vatican.

The 2018 agreement, which was renewed last year, has sparked strident criticism in the United States, which said it has failed to shield Chinese Catholics from persecution.

“You can be deceived in dialogue, you can make mistakes, all that… but it is the way. Closed-mindedness is never the way,” the pope said. “What has been achieved so far in China was at least dialogue… some concrete things like the appointment of new bishops, slowly… but these are also steps that can be questionable.”