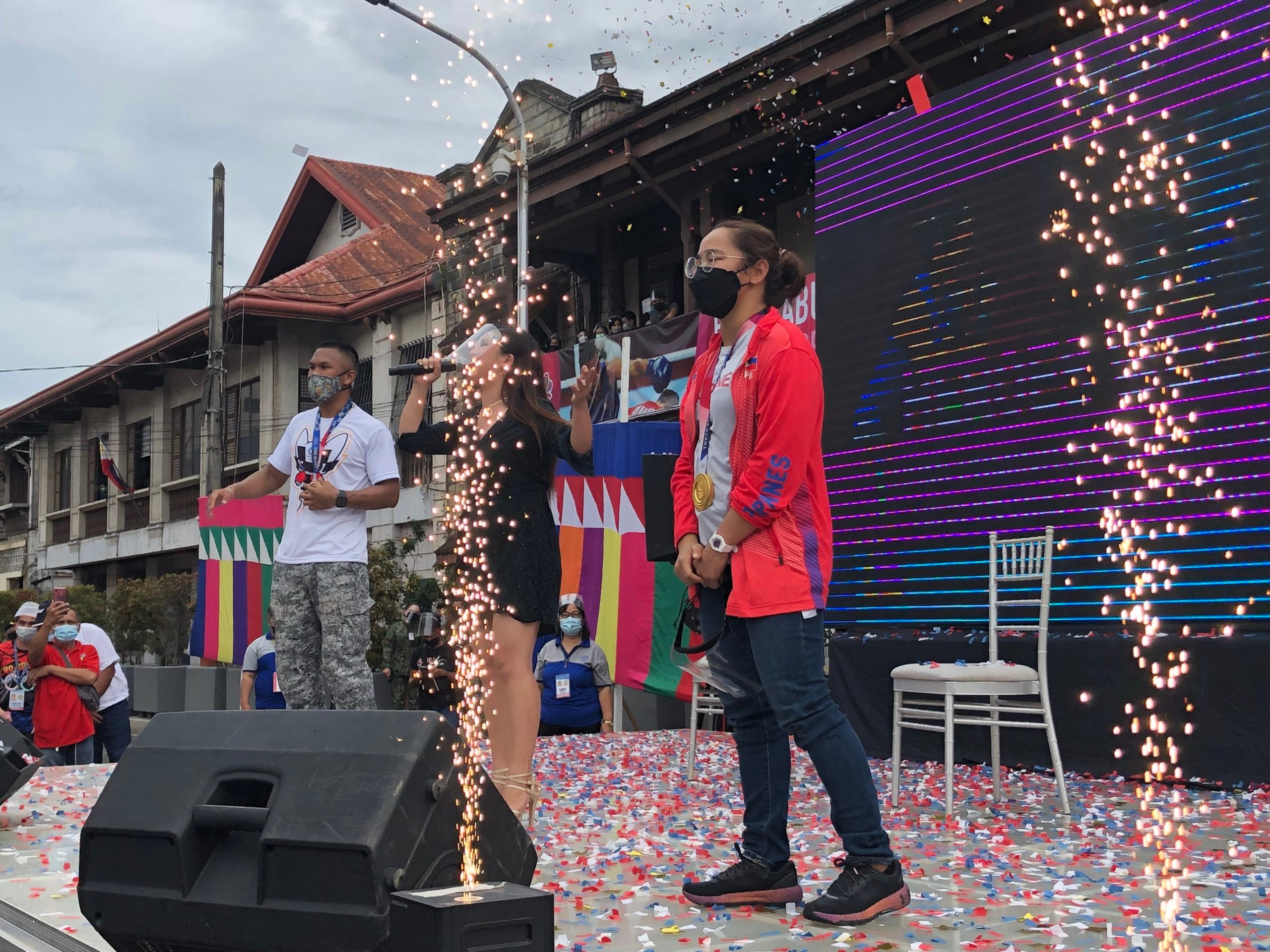 ZAMBOANGA CITY—Olympic gold medalist Hidilyn Diaz reminded Zamboangueños that it took a girl from the village of Mampang here to break the country’s gold medal drought in the Olympics and urged them to work hard as they, too, could overcome difficulties.

“My father is a tricycle driver. We all started with nothing, but this,” she said in a tearful homecoming speech, holding up her Olympic medal for everyone to see when she returned here on Wednesday.

“I am proud to say, we started with nothing and this is here now,” she said. “This! We can bring [home] a gold medal from the Olympics. I am only from Mampang, a Zamboangueña, we can do it,” said Diaz, who along with boxing bronze medalist Eumir Marcial were given a hero’s welcome at the airport by members of the Philippine Air Force. The two Olympians are among the PAF’s enlisted personnel.

Only a small crowd of well-wishers was allowed near the program venue at City Hall because of COVID-19 health protocols and the bad weather, said Police Lt. Col. Felix Martinez, city police chief.

“We expected a number of their friends, relatives and fans to come out to welcome them, so we established crowd control [to prepare just] in case the number of people would swell,” Martinez said.

Marcial, in an interview, appealed for help in his family’s struggle to recover their land whose title, he said, had been taken from them. He did not provide details.

Marcial said he was glad that Zamboanga City Electric Cooperative (Zamcelco) would give his family a free lifetime supply of electricity. But until now, they were still living in a house without electricity because their application for power connection with Zamcelco had always been turned down as they lacked documents to prove that they owned the land where their house stands.

“We still have no electricity in our house,” Marcial’s mother, Carmelita, said. “We are waiting and we hope that Zamcelco will finally [approve our application].”

“I am asking for help, any help, so we can stay at peace in our own land, which my father owned,” Marcial said. “I was born there, it was my [grandfather’s] land. I hope someone will help us.”

Diaz received P2.5 million from the city government, and Marcial P1 million and another P200,000 from an earlier victory in Dubai. The financial reward was based on a city ordinance that prescribed incentives for athletes who win in national and international competitions.