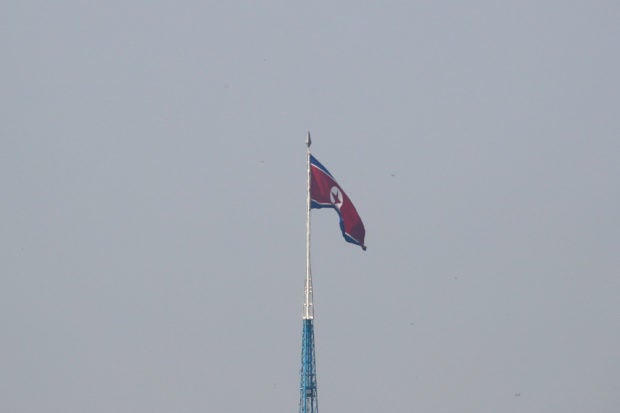 A North Korean flag flutters on top of the 160-meter tall tower at North Korea’s propaganda village of Gijungdong, in this picture taken from Tae Sung freedom village near the Military Demarcation Line (MDL), inside the demilitarzsed zone separating the two Koreas, in Paju, South Korea, September 30, 2019. REUTERS FILE PHOTO:

SEOUL — North Korean troops have been spotted in commercial satellite imagery preparing for a likely military parade, according to two organizations that track the country.

Possible dates for such an event are unconfirmed, but North Korea has used recent parades to unveil new military hardware, including large ballistic missiles.

This could indicate an upcoming military parade in October, as was seen last year, the group added.

Another nighttime military parade was held in January.

“North Korea has used military parades in the past to boost internal resolve and show off its latest weapon developments to the world,” NK Pro, a Seoul-based organization, said in a report on Thursday.

The NK Pro report said satellite imagery showed what appeared to be dozens of military trucks and at least 14 groups of about 300 soldiers each inside the parade training grounds on Monday, and troops were seen again in images from Wednesday.

“Since daily satellite imagery became commercially available in recent years, the combination of troop formation training and a full parking lot has only appeared just prior to a military parade taking place,” the report said.

Upcoming holidays in North Korea include its national foundation day on Sept. 9, and the anniversary of the ruling party’s founding on Oct. 10.

North Korea may also be looking to commemorate Oct. 8, when Kim will celebrate the 10th anniversary of becoming supreme commander of the armed forces, NK Pro said.