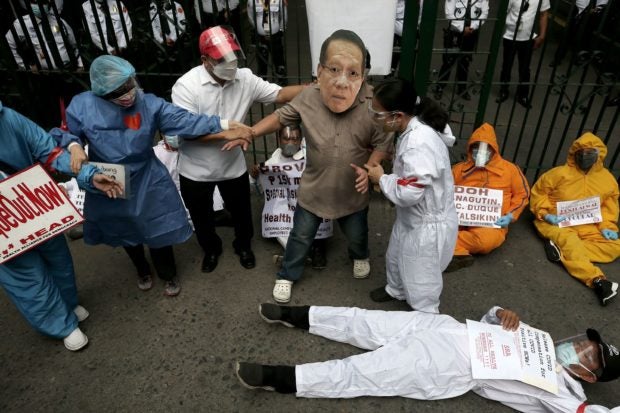 EMERGENCY SEIZURE Health workers demanding the release of their allowances and other benefits gather outside the Department of Health and “arrest” the agency’s chief as part of their protest action on Wednesday. —RICHARD A. REYES

MANILA, Philippines — As they had said they would, healthcare workers (HCWs) at the front lines in the fight against COVID-19 held protest actions on Wednesday to demand the payment of unpaid benefits and the resignation of Health Secretary Francisco Duque III.

“HCWs are like emergency room patients left to suffer and die, instead of being given first aid,” Jao Clumia, a nursing assistant and president of the St. Luke’s Medical Center Employees Association, told the Inquirer in a phone interview.

Protesters wearing protective gear and holding placards gathered at the Department of Health (DOH) in Manila on the deadline that President Rodrigo Duterte had given health and budget officials to release funds for the HCWs’ special risk allowance (SRA) and other benefits.

“It’s sad that many of us have died, many of us became sick, and many have resigned or opted to retire early, yet we are still kneeling before the DOH to give us our benefits,” Robert Mendoza, president of the Alliance of Health Workers, said from the back of a pickup truck.

HCWs in private hospitals said they were in even direr straits than their colleagues in public hospitals.

“It is clear in DOH Administrative Order (AO) 2020-0054 that there is no distinction between public and private HCWs, and that the benefits outlined there should be given to them,” Clumia said.

Under the directive, public and private HCWs employed in COVID-19 health facilities “catering” to COVID patients or providing COVID health-care response during the state of national emergency are entitled to life insurance and accommodation, transportation and meal allowances.

But the government has been remiss in providing these benefits despite repeated calls from exhausted HCWs in the private sector, Clumia said.

Donell Siazon, president of the University of Santo Tomas Hospital Employees Association, said the claim of health officials that it was still sourcing funds for the benefits meant that the DOH was remiss in its duties to begin with.

“That hurts because the DOH has access to the data, the number of HCWs in private institutions, based on licensing information. They should have known how much funds to prepare when this was in the deliberation stage,” Siazon said in Filipino.

The HCWs are also seeking compensation for those who were themselves stricken with COVID-19.

“It’s even more limited in the private sector,” Siazon said, adding that in his institution, of some 150 HCWs who had tested positive for COVID, he knew of only one who received compensation.

Siazon also said that of some 400 HCWs who had direct access to COVID patients, 300 received their SRA but not the benefits listed in AO 2020-0054.

“It even sounds like the DOH is blaming HCWs. They should have [determined] the source of the funds beforehand. They know how many HCWs there are in the country,” Siazon said in response to Vergeire’s earlier statement that funds were still being sourced for those who submitted their documents late.

Clumia said that if the government failed to resolve these issues, it would have a “domino effect” and lead to the collapse of the healthcare system.

“Many have resigned already, or have opted to work in call centers or other industries with less health risks involved and higher pay,” Clumia said.

He said that based on exit interviews he had conducted, over 140 HCWs had resigned from his institution since the start of the pandemic.

“They’re tired and afraid,” he said.

Clumia said private HCWs, supported by medical students, would hold another protest action next week if the government still failed to release the benefits due them. The DOH’s P242.22-billion budget for 2022 does not cover the SRA.

“The additional budgetary support for the benefits” is lodged in the Bayanihan 3 bill that was approved by the House of Representatives but remains pending in the Senate, Duque said at a hearing of the House health panel on Wednesday.

He was responding to the question of Marikina City Rep. Stella Luz Quimbo on the status of the SRA disbursement and if this was included in the DOH’s proposed budget.

“Unfortunately, the Bayanihan 3 bill is hanging in the balance and we are not sure if that will become a law. So what’s our plan? Where will we get the funds for that?” Quimbo said.

On the President’s order, the Department of Budget and Management (DBM) released P311.79 million to the DOH to pay for the SRA of HCWs in public and private hospitals.

Quimbo pointed out that some 148,000 HCWs had not been paid their special risk allowance and that each should receive an average of P34,000.

This means a funding shortfall of P5 billion, she noted, adding that in the case of the lapsed Bayanihan 2 law, around P13.5 billion was allocated for the SRA.

Assistant Health Secretary Maylene Beltran assured the lawmaker that the DOH had requested additional funds from the DBM to cover the first batch of 17,670 HCWs and another batch of 80,848.

Meanwhile, Duque said the grant of SRA to those with indirect exposure to COVID cases would need an enabling law.

The SRA of those directly handling COVID cases was provided for in the Bayanihan 1 and 2 laws, which are no longer in effect.

“It is only by way of legislation that this can be [resolved]. Otherwise, the Commission on Audit will run after all our chiefs of hospitals. [It] will run after everybody else that allowed it,” Duque said.