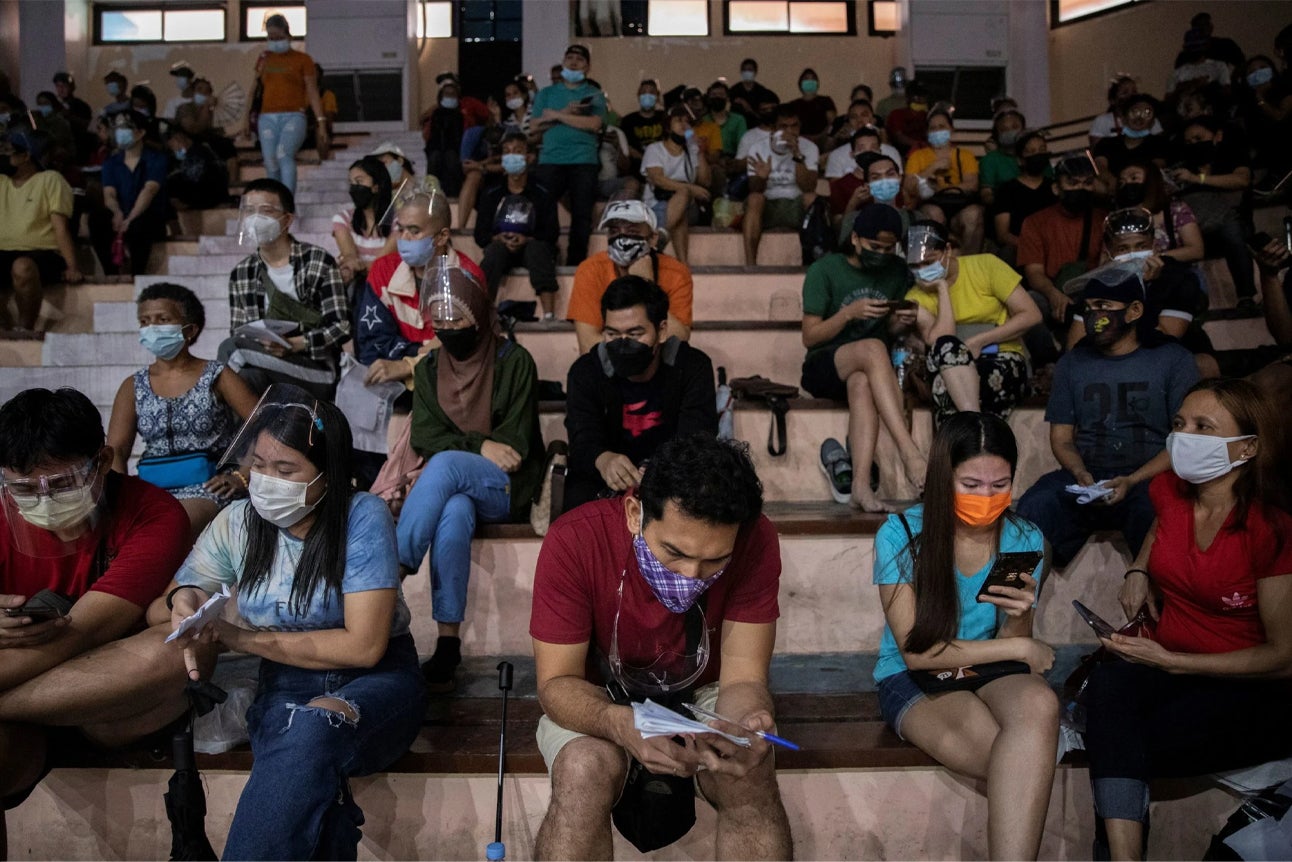 People waiting for their turn at a vaccination site in Manila use their phones to while away time. REUTERS

MANILA, Philippines—A new wave of COVID-19 cases, attributed to the Delta variant of the virus SARS Cov2, is churning out numbers that are now alarming health experts—infections among children.

On Tuesday (Aug. 31), World Health Organization (WHO) declared that Delta is now the most dominant variant of SARS Cov2 in the Philippines.

The US Centers for Disease Control and Prevention (CDC) has found Delta, originally called Indian because it was first detected in the populous South Asian country, to be as contagious as the virus that causes chickenpox.

To have a better picture, the chickenpox virus is 90 percent transmissible from an infected person to others who had been in contact with the patient.

The Philippine government has so far confirmed a total of 1,789 Delta variant cases in the country, including 38 that remain active as of Aug. 27.

READ: Delta now most dominant variant in PH — WHO

Latest reports on the COVID situation in the Philippines showed that Delta was wreaking havoc not only on adult populations but children as well. The vulnerability of children was heightened by the lack of approval yet of vaccines for them.

What we know so far

Experts believe that the recent increase in COVID-19 cases among Filipino children, who get severely sick in many instances, was attributable to Delta.

According to Dr. Rontgene Solante, an infectious disease expert and a member of the Philippines’ vaccine expert panel, the rising infections and deaths among children who get sick with COVID are showing to be Delta cases.

“When you have a virus that is highly transmissible when you have 50 times more transmissibility than the original strain, then there’s no exception with that, even children who are exposed to adults,” he said.

READ: COVID-19 infection, deaths in children can be attributed to Delta variant — expert

In the Philippine General Hospital (PGH) alone, children aged 7 days old to 15 years have been admitted to the pediatric COVID ward after contracting SARS Cov2 and developing mild to severe symptoms of COVID-19. 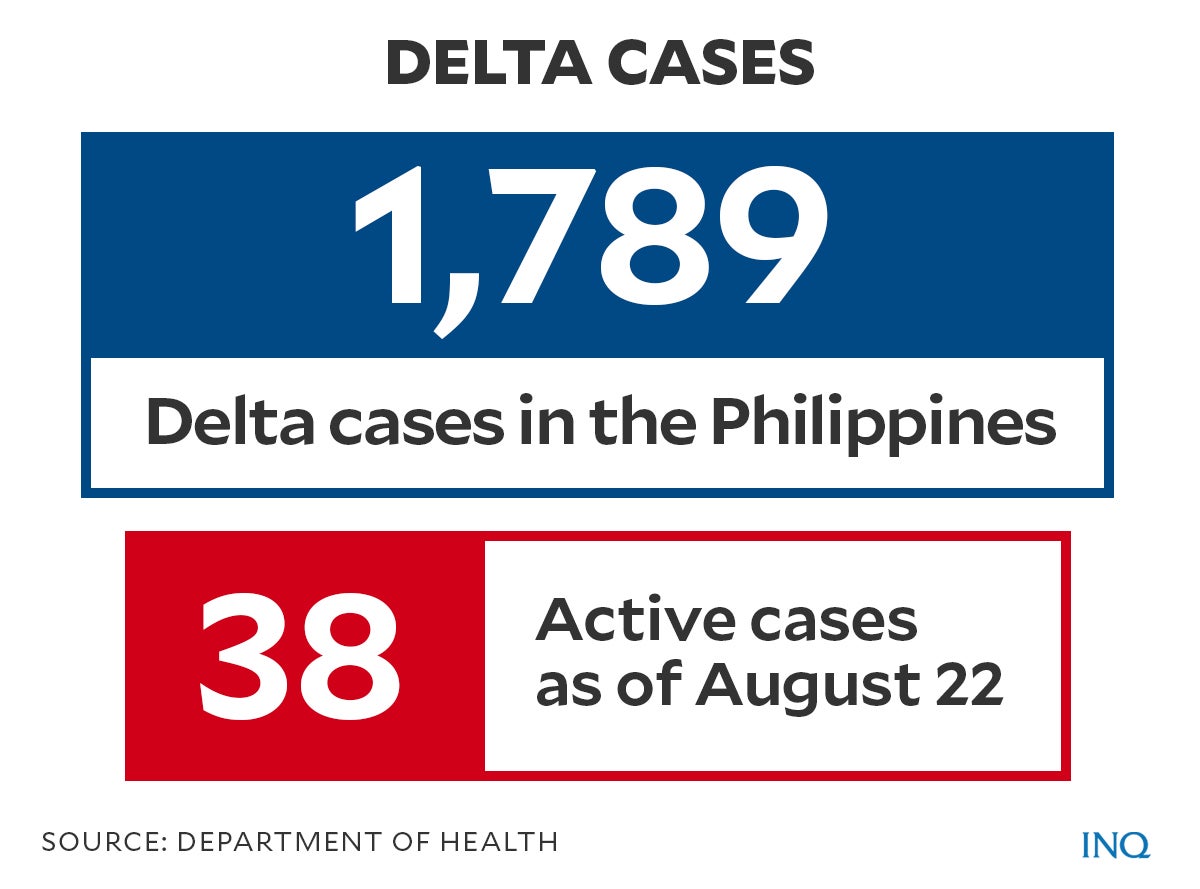 Children had been previously believed to be at lower risk of getting COVID-19.

“Children with COVID-19 generally have milder effects and better prognosis than adults but those who have underlying diseases have higher risks [of experiencing] severe illnesses,” said Dr. Cecilia Francisco, director for Thematic Programs of Save the Children Philippines.

However, children are not immune to SARS Cov2 and are now getting sicker with COVID-19.

Del Rosario said that with Delta variant, “it is not surprising to note” that children would suffer from a severe form of COVID-19.

READ: COVID-hit kids are a growing concern at PGH

The government has yet to release consolidated data on the number of Delta variant cases among the younger population in the Philippines.

But here are some of the cases that have been reported in the past few weeks:

July 27, 2021: The local government of San Juan City confirmed that among those who have been infected with Delta in the city was a nine-year-old child.

Aug. 6, 2021: The Department of Health (DOH)-Central Visayas reported that two children in Cebu, both aged 10 years old, have contracted the Delta variant.

Aug. 17, 2021: In Bacolod City, again, two children, both with a pregnant mom with Delta variant, also tested positive for the more transmissible variant.

Aug. 27, 2021: A two-year-old child became the first recorded Delta variant case in Zambales. According to Zambales Gov. Hermogenes Ebdane Jr., the patient is child of a nurse who had previously tested positive for SARS Cov2.

Aug. 18, 2021: A four-year-old kid in South Cotabato died after getting infected with Delta. The case was confirmed by provincial health officer Dr. Rogelio Aturdido.

The increasing Delta variant cases among adults and children in the Philippines is firing up conversations on whether the government should start vaccinating children below 18-years-old. 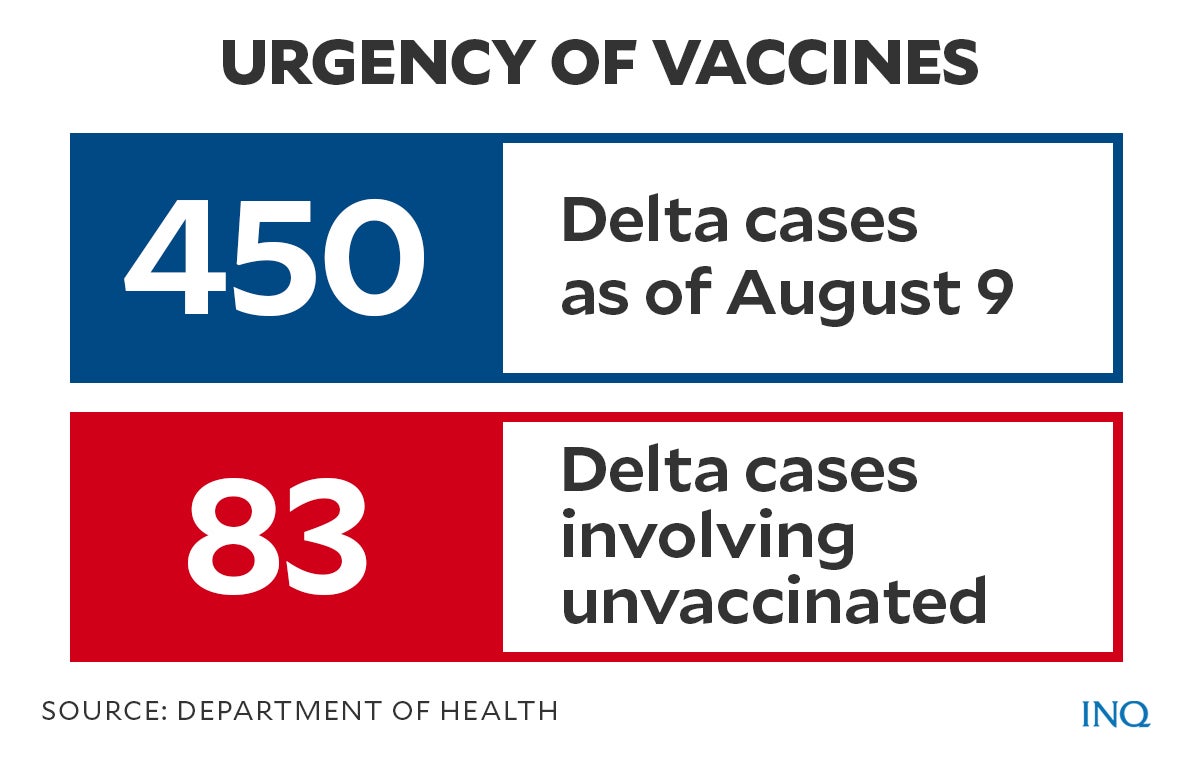 Existing emergency use authorization for vaccines that had been approved by the Philippines’ Food and Drug Administration limited the vaccines’ use to only adults.

According to DOH data, as of Aug. 9, 83 of 450 cases of the Delta variant in the country were unvaccinated. As vaccines have not been approved for children, it is safe to assume that every children in the country is not vaccinated.

On Aug. 9, Health Secretary Francisco Duque III said the DOH will not yet recommend the vaccination of minors due to lack of vaccine supply.

“We need to consider the current vaccine supply before we decide to allow the vaccination of children,” said Duque.

“That’s why the recommendation of the DOH stays — to give priority to adults based on our prioritization framework,” he said, speaking partly in Filipino.

“Our experts said we can consider actually giving vaccination to children who might be having comorbidities. This might help in giving them additional protection from lethal COVID-19,” he added.

The DOH chief also emphasized the concept of “ring vaccination” or the vaccination of adults who are around children.

On the other hand, vaccine czar Carlito Galvez Jr., a former military chief, said that children and teenagers in the country may get vaccinated by the end of September or October.

He said he had already suggested to the National Immunization Technical Advisory Group and to experts “that we have to include children as soon as possible considering that they will also be vulnerable, particularly those children with comorbidity.”

Galvez said the government negotiated for the supply of at least 26 million vaccine doses for children up to the age of 15.

To date, only Pfizer has an emergency use authorization for the use of its vaccine on those aged 12 to 15.

As of Aug. 29, the government has already administered a total of 33,099,392 doses of vaccines since the vaccination drive started last March 1.

At least 13,784,681 individuals in the country are now fully vaccinated against SARS Cov2.

Government data showed that 19,314,711 individuals have already had their first dose.

This is at least 27.59 percent of the Philippines’ goal to administer at least one vaccine dose to a total of 70 million individuals.

In Metro Manila and other areas on modified enhanced community quarantine (MECQ) until Sept. 7, children (or those below 18 years old) are not allowed outdoors.

Aside from keeping children indoors to prevent catching the virus, especially the highly contagious Delta variant, parents and adults are reminded to get vaccinated as an added protection for children and adolescents, who are yet to receive vaccines.

“We also emphasize our call to parents, guardians, caregivers, and communities for them to act more responsibly around children by strictly adhering to the minimum health and safety protocols to protect themselves and their children from the imminent threats of the Delta variant,” said lawyer Alberto Muyot, CEO of the group Save the Children Philippines.

According to the DOH, most cases of COVID-19 in the country involved people between the ages of 20 to 39 years old. 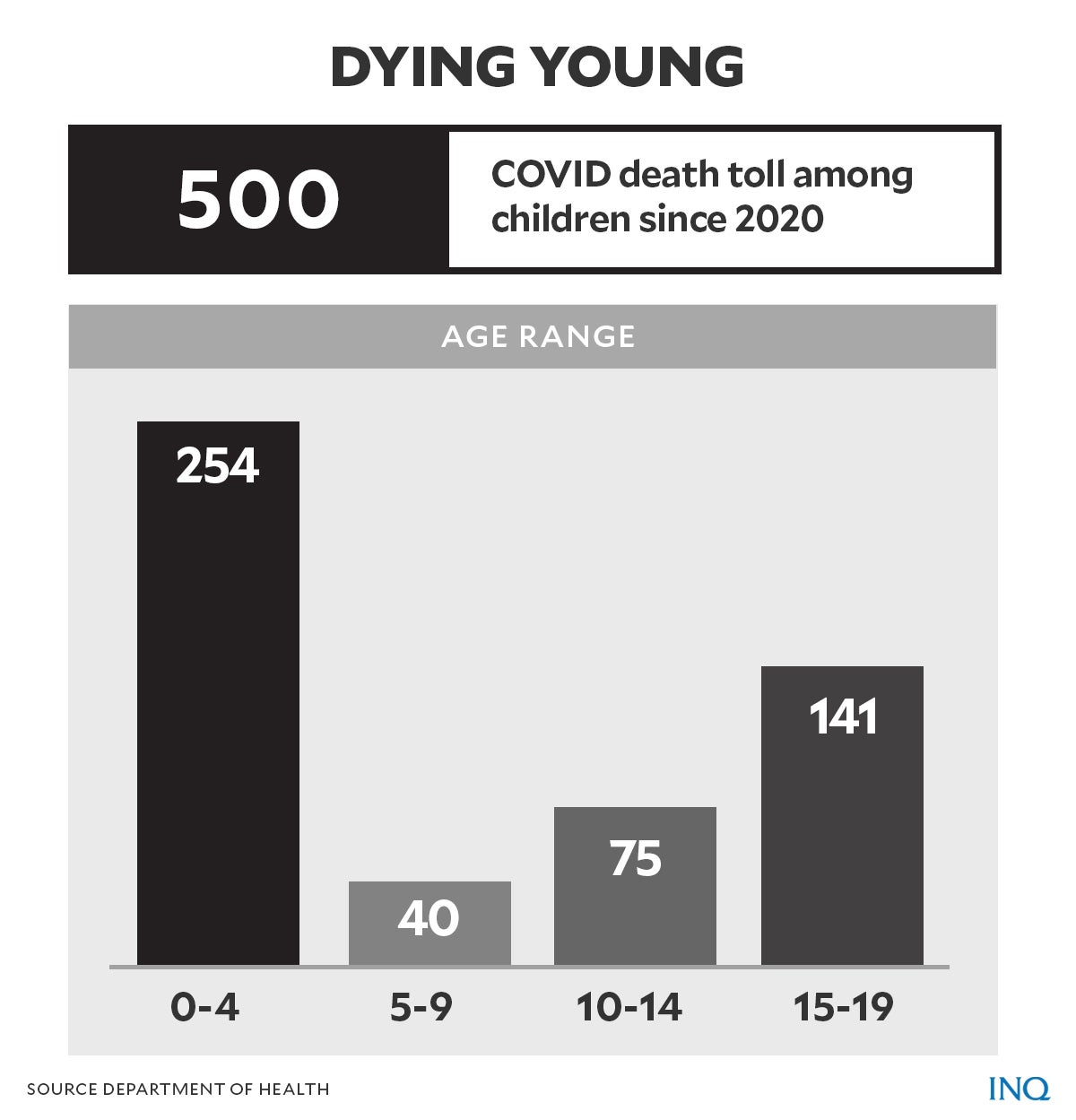 But infections among those below 18-years-old are still high.

DOH data showed there are 38,825 COVID-19 cases among children who are four years old and below.

At least 40,286 children between five years old and nine years old got the disease. The death count for this age group is 40 while 36,519 recovered.

Teenagers between 15 and 19 years old had the most cases among the younger population with a total of 82,434 infections.

Delta: When being young is no longer a protection