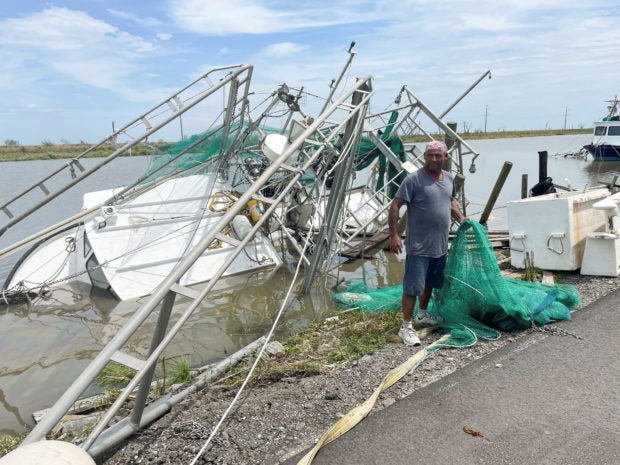 Some 20%-30% of the fleet of shrimp boats in the Golden Meadow region of Lafourche parish was wiped out by the powerful winds from the Category 4 hurricane that made landfall on Sunday, shrimpers said.

The industry had already suffered lower seafood demand during the COVID-19 pandemic. Then the storm struck fishing communities southwest of New Orleans that had largely been spared when Hurricane Katrina pummeled the state 16 years ago.

“We’ve never seen anything this powerful around here before,” said shrimper Russell Plaisance, 34, while examining his boat. “Katrina didn’t do anything to us. “We’re just gonna try and survive.”

Plaisance said local shrimpers lost 65%-70% of their revenue in 2020 as the pandemic shut restaurants. This year had been looking up for the top shrimp harvesting state, until the storm.

Shrimp fishing in Louisiana accounts for 15,000 jobs and has an annual impact of $1.3 billion in the state, according to the Louisiana Seafood Promotion & Marketing Board.

“This is gonna set us back at least a month,” Plaisance said of the storm.

He estimated that 50% of the surrounding houses are unlivable. Plaisance’s boat was damaged and had oil leaks.

Others had even worse luck. A boat owned by Plaisance’s brother sank.

So did a boat belonging to James Serigny, 52, a lifelong resident of Golden Meadow. Waiting for crews to help pull it out of the water on Tuesday, Serigny said the hurricane and its 140-mile-per-hour winds also destroyed his home.

Shrimping season runs from August to December and losses from missing a whole season could run up to $100,000, Serigny said.

The lack of power in the region also makes it difficult for shrimpers to get back to their livelihoods.

Kari Guidry, 52, has lived and worked as a shrimper in the area for three years. She returned to survey the damage to her home on Tuesday after she and her family evacuated on Saturday.

“I don’t know what we can salvage,” she said. Her car’s rear back window was smashed by flying debris and her roof was also damaged.

“They need power to keep the shrimp cold on ice and the sheds need power,” she said.

“Ain’t no telling when we can get back to it.”

Plaisance said his first priority is to find a place to live for him, his wife and three daughters. His house suffered damage to the ceilings and there are holes in the roof.

Plaisance was also worried about one of his customers, distributor Dean Blanchard Seafood on the barrier island of Grand Isle, which was devastated by the hurricane.

“It was wiped out totally. It might be a month before he buys shrimp again,” said Plaisance.