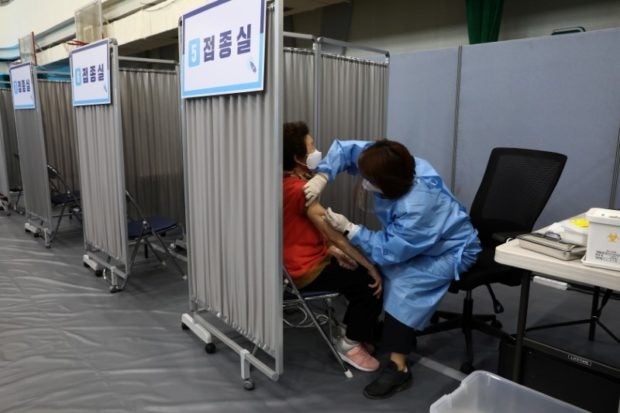 SEOUL — South Korea plans to begin giving out COVID-19 booster shots from October, joining several countries that have approved such doses amid resurgent infections and concern that vaccine protection wanes over time.

The plan will kick in once an October target for full vaccination of 70% of the population is achieved, as authorities aim to boost the rate above 80% with coverage for pregnant women and minors aged between 12 and 17 in the fourth quarter.

Initial booster doses will go to those with weakened immune systems or deemed to be at high risk. Others will receive them six months after full vaccination, the Korea Disease Control and Prevention Agency said.

“We will start with booster shots for high-risk groups such as the elderly and virus-prevention, medical personnel and gradually expand inoculation in line with expert recommendation and decisions by health authorities,” President Moon Jae-in told his top aides on Monday.

Although the World Health Organization has repeatedly urged a delay in booster doses, arguing that the world’s most vulnerable people should be fully vaccinated first, several countries have approved them, citing data on waning protection.

Vaccine booster doses will be made widely available to Americans in September, while nations from France and Germany to Israel have decided to offer them to older adults and those with weak immunity.

Evidence is growing that protection from COVID-19 vaccines ebbs after six months or more, especially in older people with underlying health conditions.

In June, South Korea said it planned to secure more mRNA vaccines for booster doses next year for the entire population, on top of its already agreed 106 million doses from Pfizer/BioNTech/ and Moderna.

South Korea has struggled to rein in daily COVID-19 cases as it battles its worst wave of infections since early July.

By Monday, at least 56.5% of the population of 52 million had received at least one vaccine dose, while 29.6% had completed the inoculation.

Read Next
Duterte challenges lawmakers to probe all agencies flagged by COA
EDITORS' PICK
Acer starts the year off strong with the Aspire Vero National Geographic Edition
PH logs 37,070 more COVID-19 cases; over 33K others recover
The best of bayside and city living at SMDC’s Sail Residences
Comelec division junks petition to cancel Marcos COC for president
Marcos camp ‘extends hand of unity’ after COC cancellation bid is denied
Over 3 Million worth of prizes to be won at Smart Padala’s SENDali Manalo Promo!
MOST READ
NBI foils escape attempt of Kerwin Espinosa, two others
Comelec division junks petition to cancel Marcos COC for president
Francine Diaz’s manager denies actress is being courted by Seth Fedelin
‘Not my loss’: Did Kris Aquino just comment on her breakup with Mel Sarmiento?
Don't miss out on the latest news and information.