Americans give Biden low marks on Afghanistan pullout, want to see evacuations through 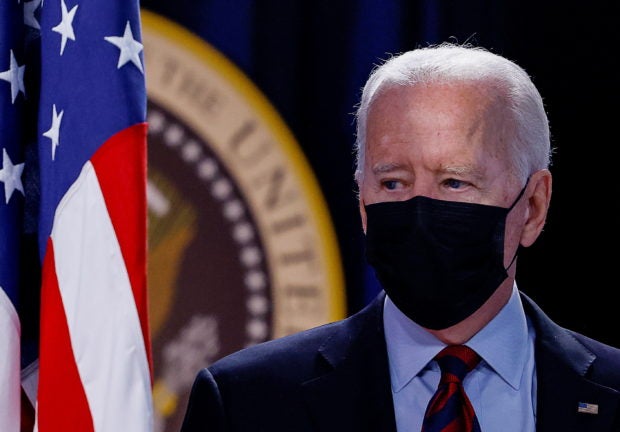 U.S. President Joe Biden hosts a virtual briefing on Hurricane Ida with FEMA Administrator Deanne Criswell and governors and mayors from states and cities impacted by the storm, in the Eisenhower Executive Office Buildings South Court Auditorium at the White House in Washington, U.S., August 30, 2021. REUTERS

NEW YORK — Less than 40% of Americans approve of President Joe Biden’s handling of the U.S. military withdrawal from Afghanistan, and three quarters wanted U.S. forces to remain in the country until all American civilians could get out, according to a Reuters/Ipsos opinion poll released on Monday.

The national survey, conducted Aug. 27-30, found that 51% disapproved of Biden’s approach to the pullout while 38% approved.

The United States completed the withdrawal of its military forces from Afghanistan on Monday, two decades after it invaded the country following the Sept. 11, 2001, attacks.

The United States and its allies have flown out more than 122,000 people since Aug. 14, including their own citizens and Afghans who helped them over 20 years of war.

But some Americans and many thousands of eligible Afghans did not make it out of the country, which is now once again under the control of the Taliban. Washington will pursue a diplomatic effort to evacuate those left behind.

In the poll, completed just before the last U.S. troops left Afghanistan, 49% said the U.S. military should stay in Afghanistan “until all American citizens and Afghan allies have been evacuated,” and 25% said that U.S. forces should remain until all U.S. citizens could leave.

Only 13% said that troops should “evacuate immediately.”

When asked what they thought of how the Biden administration handled the resettlement of America’s Afghan allies, 45% approved while 42% disapproved.

Biden’s administration has been swamped by a trio of crises this month, including the coronavirus pandemic and Hurricane Ida, which wreaked havoc across Louisiana after making landfall on Sunday.

The Reuters/Ipsos poll found that 20% of adults said Biden deserves the “most blame for the current state” of the Afghanistan war.

Another 30% blamed a slew of other actors in the region, including the Taliban, the Afghan military, U.S. military leaders and ISIS-K, the militant group that claimed responsibility for last week’s bombing at the Kabul airport that killed 13 U.S. service members.

Even as they watched the dramatic evacuation under way in Afghanistan, Americans remained focused on issues closer to home: the pandemic and the U.S. economy. Both are areas of relative strength for Biden.

The poll found that 35% of Americans believe that the coronavirus is the biggest problem facing the country today, while 18% said it was the economy. Only 10% said it was the war in Afghanistan.

Some 55% of adults approve of the way Biden has steered America’s COVID-19 response, while 38% disapprove. About the economy, 47% said they approved of his policies while 45% disapproved.

Americans also do not appear to be beating up on Biden’s Democratic Party following the highly criticized evacuation effort in Afghanistan.

When asked which party has a better plan for handling the war on terror, 29% said Republicans while 26% said Democrats, giving the Republicans a 3-point edge. Four years ago, ahead of the 2018 midterms, Republicans had a 7-point advantage over Democrats with the same question.

Under the 2020 withdrawal agreement, Trump began to sharply reduce troop levels to the point where there were only about 3,500 left in Afghanistan – from a onetime peak of 100,000 at the war’s zenith – by the time Biden took office in January.

Like Trump, Biden had promised to end the war.

But his administration miscalculated the strength of the U.S.-trained Afghan military, which quickly surrendered large swaths of the country to the Taliban in the weeks leading up to Biden’s self-imposed Aug. 31 deadline for the U.S. withdrawal.

The Reuters/Ipsos poll was conducted online, in English, throughout the United States. It gathered responses from 1,003 adults, including 465 Democrats and 354 Republicans. The results have a credibility interval, a measure of precision, of 4 percentage points.